Tl;dr - We want to invest more draft capital into WR than RB because they score more points on average, miss fewer games, and are easier to project, but that doesn’t necessarily mean we need to fade 1st- and 2nd-round RBs. Using the “Bimodal RB” strategy (two RBs in the first three rounds and then ignoring RB until at least the 8th round) is supported by historical data.

“Zero RB” a contrarian fantasy draft strategy that punts running back early in drafts (let’s say no RBs through the first four rounds or one RB through the first seven rounds) and instead aims for finding plug-in RBs later on in drafts, while hammering WR and TE in the earlier rounds. 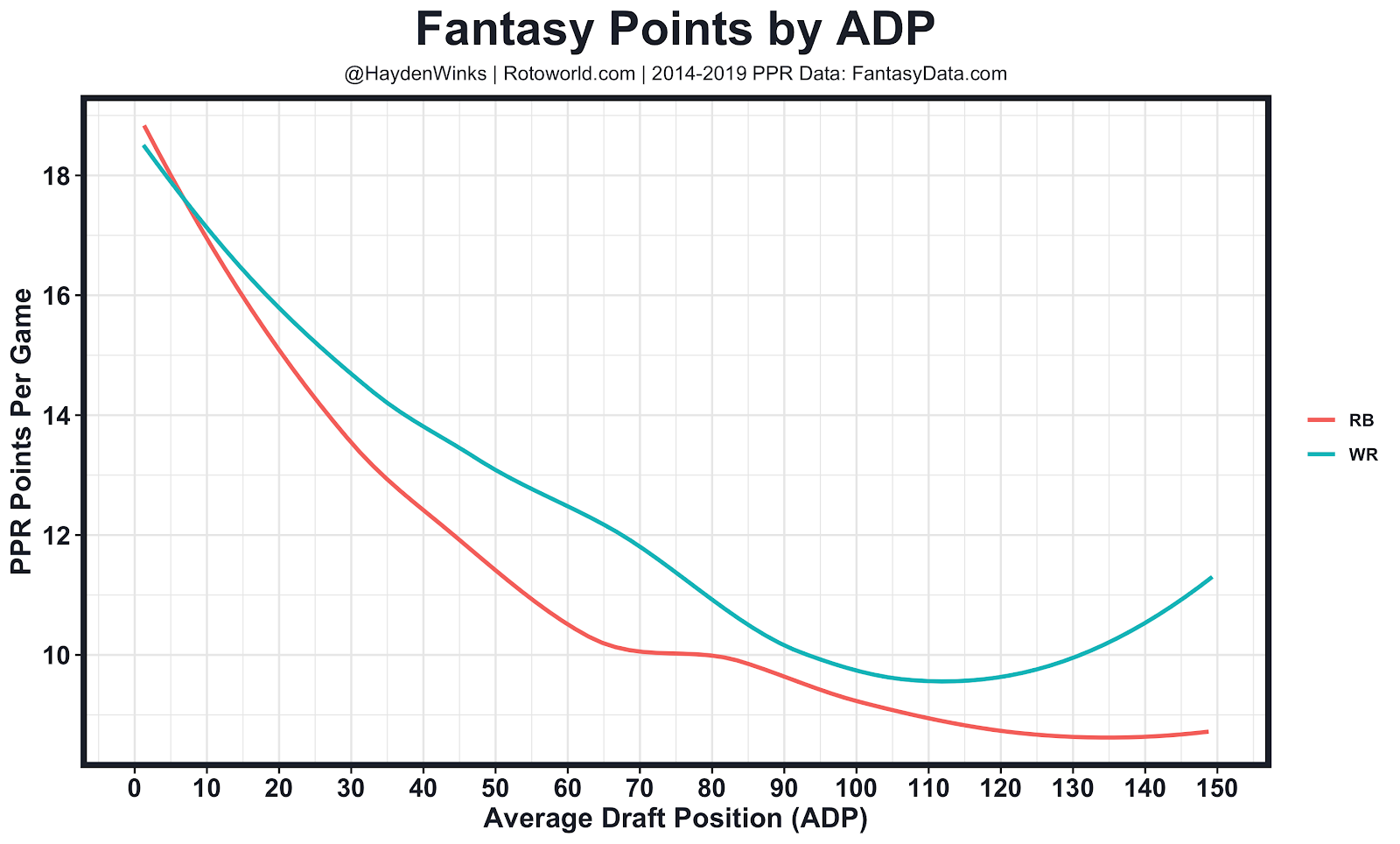 One of the key thought processes with the zero-RB strategy is that WRs have a lower bust rate than RBs in the early and middle rounds. This is undeniably true, particularly so when it comes to injury rates between WRs and RBs as Josh Hermsmeyer measured in this Rotoviz study. With running backs taking more hits and making more sudden lateral movements, it’s no surprise to see RBs get injured more often. Also, even without injuries, WRs simply average more PPR points per game than RBs do at the same Average Draft Position at just about every point in fantasy drafts (see above). This is especially the case in the 3rd to 7th-round range. 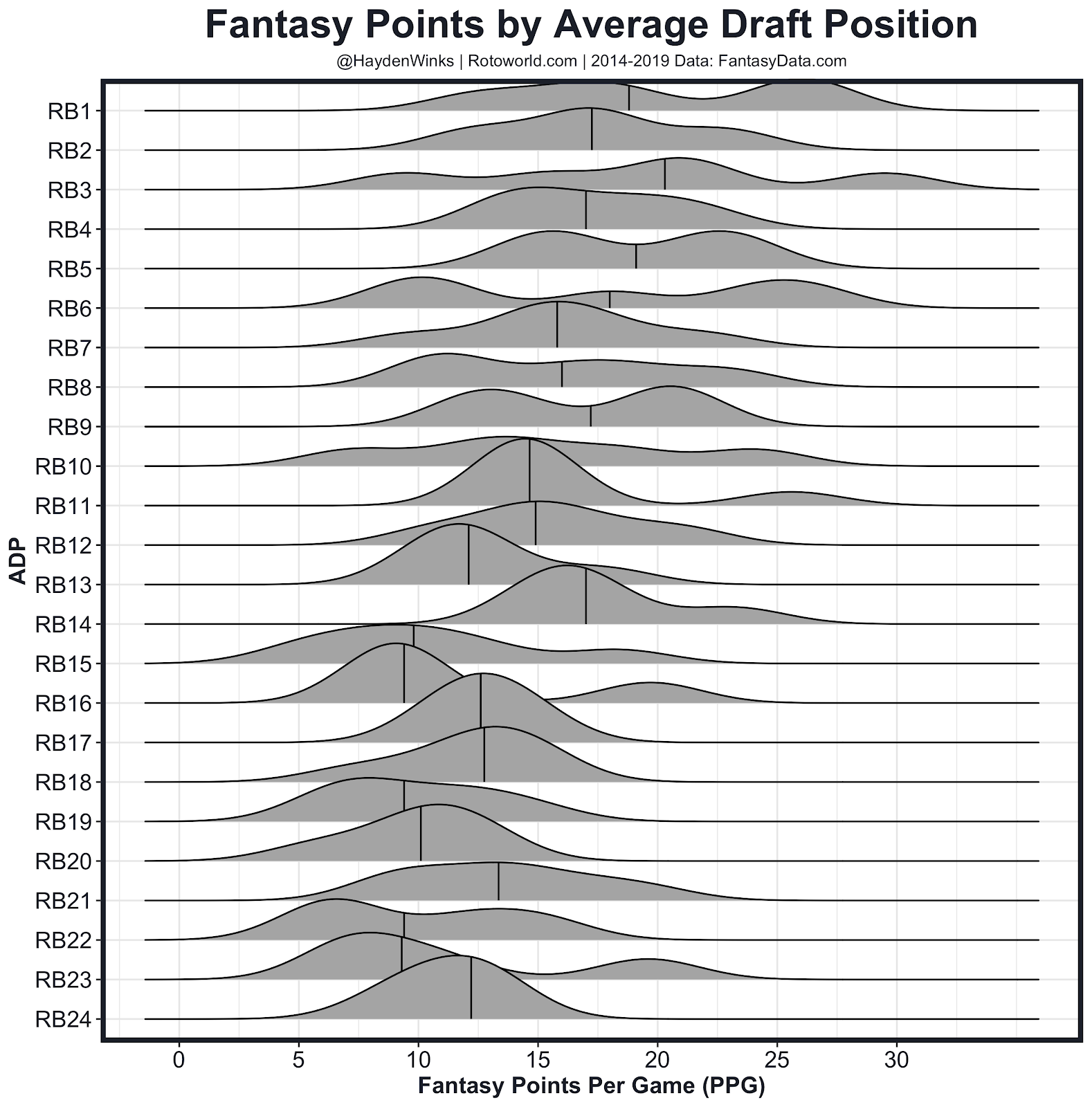 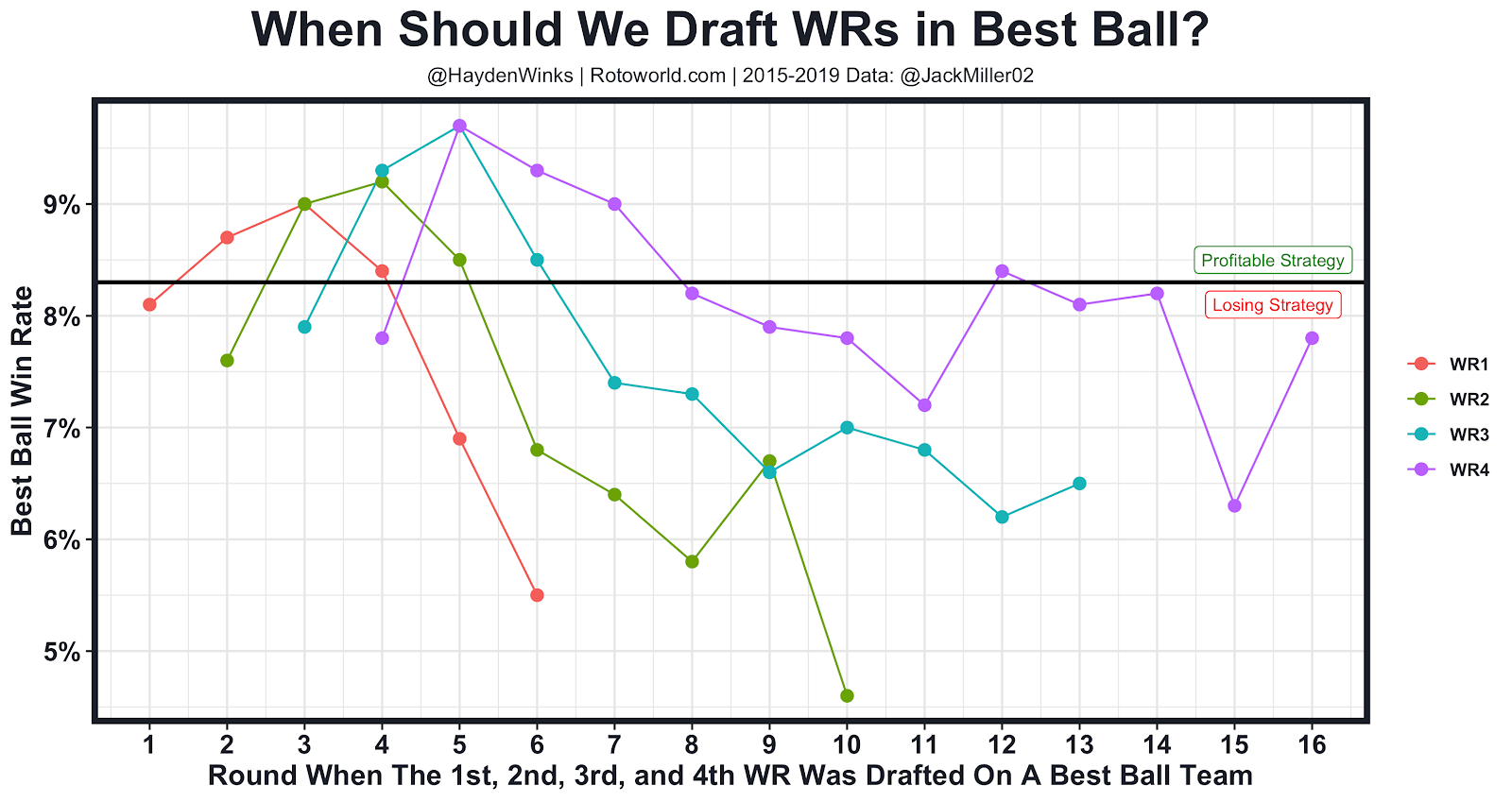 Meanwhile, this 3rd to 7th-round range is where we’ve been printing straight cash by selecting WRs. Jack Miller of Rotoviz shared some historical Best Ball win rates based on when fantasy managers selected their WR1-4. Any point on the chart above 8.3% is plus expected value (+EV), so it’s obvious that it’s best to draft WRs in the 3rd to 7th-round range where the dots are above the 8.3% black line. (I have a full column on this topic here.) Essentially, it’s nuts to be targeting RBs over WRs in this particular range, which is what zero RB is doing.

Beyond Zero-RB’s main point that WRs are safer and on average better than RBs, I also admit that there’s more merit to the strategy in shallower leagues. The reason for that is because it’s easier to actually take advantage of the surplus of RB injuries with fewer RBs already rostered. For example, in a 10-team league with 16-man rosters like the one I play in with my high school buddies, I could likely pick up and start Carlos Hyde off waivers going into Week 2 if Chris Carson left the season opener with an injury. In deeper leagues, Hyde is already rostered.

There’s also a good case to be made to utilize zero RB in 2020 more so than ever with coronavirus testing set to cause more missed games than ever. Of course, coronavirus testing will cause QBs, WRs, and TEs to miss time as well, but backup RBs absorb their starter’s volume more closely than backup WRs and backup TEs do. That means insurance RBs are more valuable in 2020.

Like zero RB suggests, we do want to be putting more resources into WR than RB — WRs are better flex plays because they score more points than RBs on average — but I’m not convinced that completely punting RBs early in drafts is +EV. To win our leagues, we either have to spend early picks on highly-projected RBs or find breakout RBs. Despite having a higher bust rate than WRs, I’m okay taking on the risk of early-round RBs because we are looking for ceilings, not floors in fantasy drafts. Nobody makes money or remembers a team that finishes in 4th place. Now let’s investigate the “find breakout RBs” part. 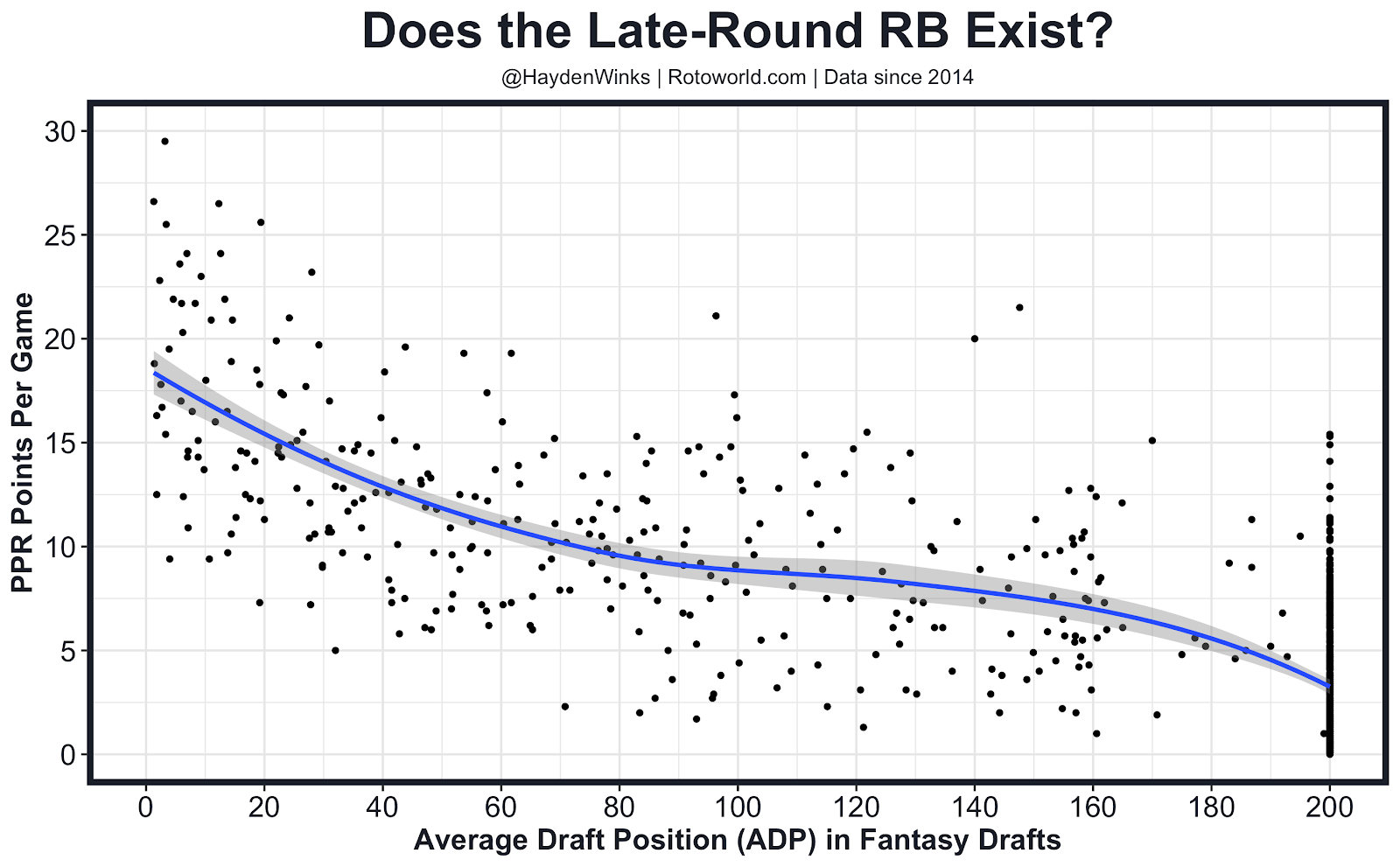 By seeing the dots on the chart, we can easily see the range of outcomes of RBs based on where they’re being drafted. Because our goal is to finish 1st in our leagues, I’m essentially only trying to find players that could actually start on a quality fantasy roster. It’s similar to the phrase we hear during NBA player evaluations: “Can this player be the 2nd or 3rd option on a championship team?” There are NBA players who can start, but aren’t good enough to start on actually good teams. In fantasy, this is someone like last year’s version of David Montgomery.

Anyways, this chart shows how most of the highest-scoring RBs since 2014 have been top-30 or so overall picks in fantasy drafts, regardless if we’re using 15 or 20 PPR points per game as our arbitrary cutoff. What we don’t see very often is a RB who was drafted outside of the top-60 overall picks have sustained fantasy success. A handful of productive weeks here and there? Sure. Sustained success throughout a big chunk of the season? That’s rare, meaning to compete for 1st place a zero RB drafter either has to a) piece together multiple late-round RBs, or  b) completely dominate at all other fantasy positions. Even if the second option happens, they still likely would be behind an early-RB team if that team drafted values in the mid-range WR tier that’s historically been +EV to target.

To summarize, here’s where the 61 RBs in this sample who averaged 15 PPR points per game were drafted:

Adam Levitan said something on an Establish The Run podcast that stuck with me: “We have to draft a RB we don’t prefer to a WR at some points in the draft to fill out our rosters.” That’s not an exact quote, but you get the point. The 1st round (and to a lesser extent the 2nd) is where that trade-off makes a lot of sense (while of course finding backup RBs in the double-digit rounds). If you scroll all the way back up to the first chart in this column, RBs average more points than WRs through the first eight or so overall picks, and even when WRs begin to score more points than RBs in the 2nd round of fantasy drafts, the gap between the two positions is narrower here than it is from the 3rd round on. When that gap is widest is when we should select WRs over RBs, and that certainly happens the most in the 30th to 80th overall range. That, of course, is the zone that we just went over with the WR win rate data. 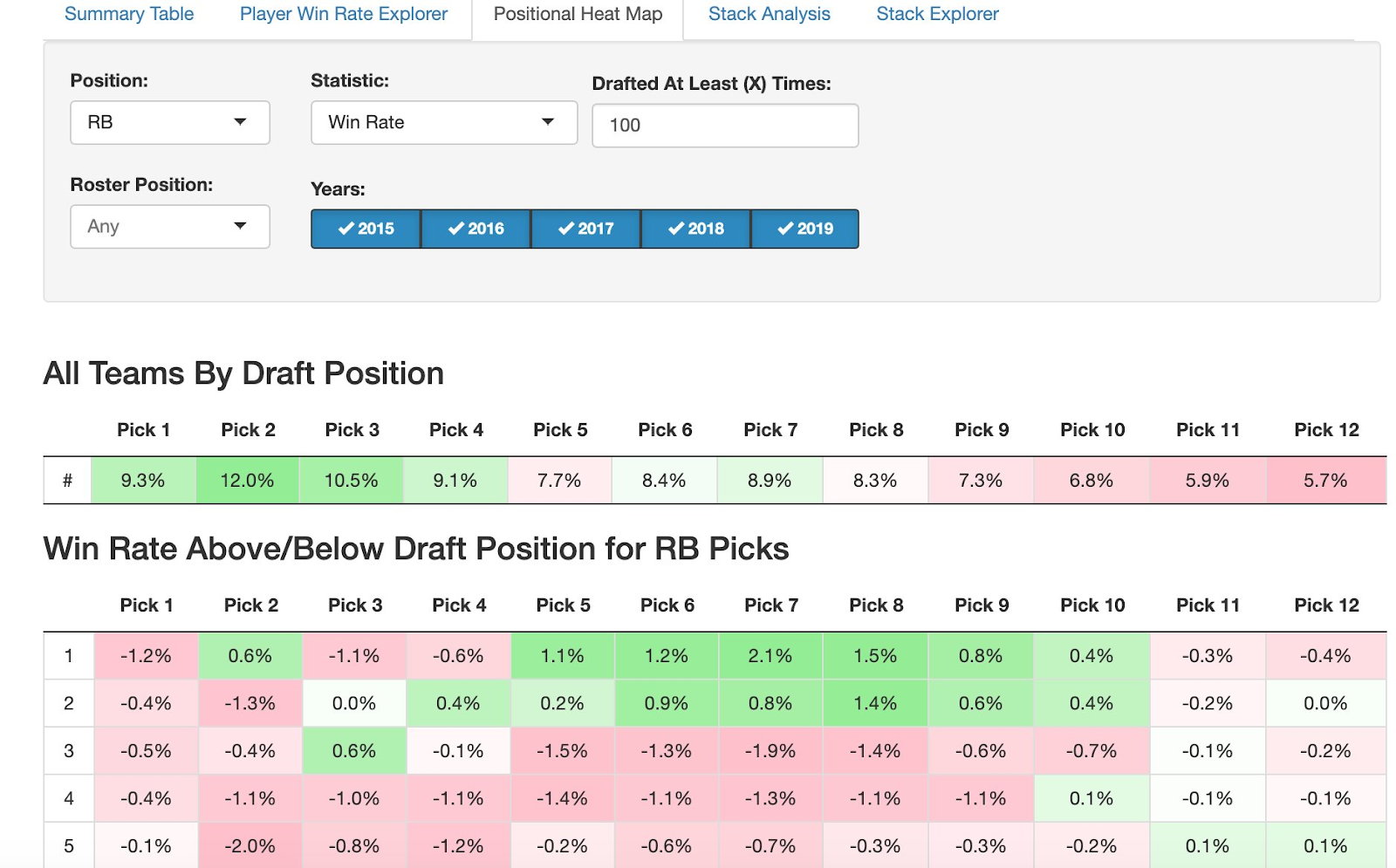 Not only do average fantasy points suggest that the gap between RBs and WRs is slimmest in the earliest part of drafts, but Rotoviz’s data also notes that the win rates of RBs in the 1st and 2nd round of fantasy drafts is +EV. Specifically, teams that drafted an RB in the 1st round have an average win rate that’s +0.34% over expected. In the 2nd round, RBs have a win rate that’s +0.23% over expected. Like I’ve repeated a million times, it’s the 3rd to 5th round RBs that are the ones to seriously avoid. Just check out the red area of Rotoviz’s Mike Beers’ chart from above.

Meanwhile, teams that begin with only WRs at the beginning of drafts have slightly below-average win rates: WR-WR start (7.6% win rate), WR-WR-WR start (7.9%), and WR-WR-WR-WR start (7.8%). Keep in mind that the average win rate is 8.3%. I understand that win rates in general are lower if you have a late pick (and that’s when many people pivot to zero RB), but I do think the people who are pivoting to zero RB are usually smart drafters  -- your dumb friend is likely hammering RBs early just by coincidence -- and they still aren’t making up the difference with the zero-RB strategy. Maybe because it doesn’t work in the context they’re aiming for.

For lack of a better term, “bimodal RB” advises selecting two RBs within the first three rounds of fantasy drafts, ignoring RBs in the middle rounds, and then selecting two or three classic “zero RB” targets at least after the 7th round. This really is just stealing concepts of all the trending draft strategies, but it lines out the specific details. Essentially, “bimodal RB” is a more aggressive “modified zero RB” and a less aggressive version of Mike Beers’ “hyper-fragile RB” strategy.

1. It targets the points of drafts where the difference between RBs and WRs is the narrowest (in the 1st and 2nd round).

2. It captures some of the upside of insurance RBs and undecided backfields in the 8th round and beyond. This point is heightened for the 2020 season where the coronavirus likely sets NFL records for missed games.

3. It targets WRs in the early-middle rounds where WR win rates are the highest (3rd through 7th rounds).

4. It allows for spending more total draft picks on volatile week-to-week positions like WR and TE, particularly in Best Ball formats where accounting for volatility is somewhat important. This also means it’s easier to find passing-game stacks because more draft picks are spent on those positions.

An Example of “Bimodal RB”

This is how it works from the 6th pick in a 10-team Yahoo! Best Ball draft: 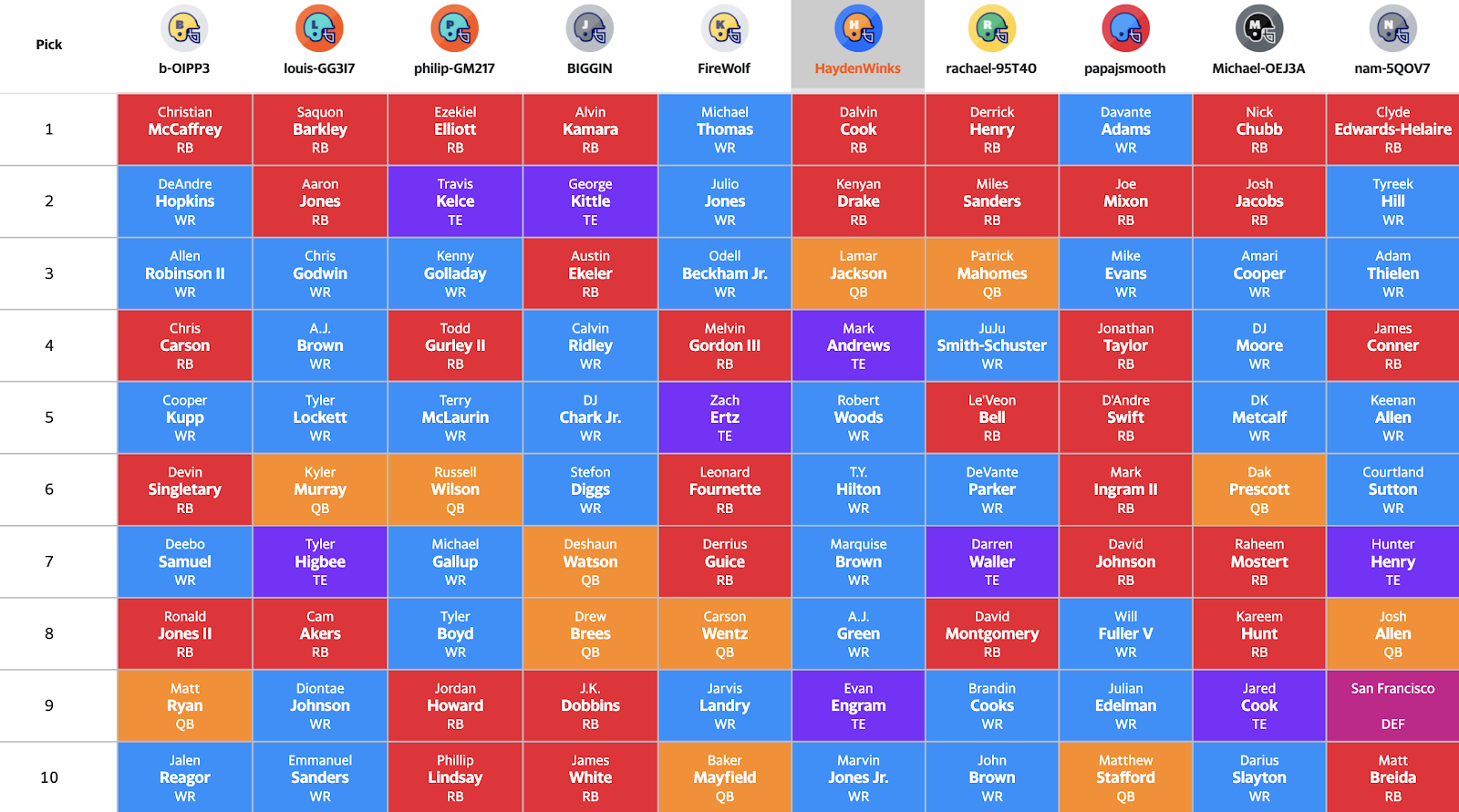 I start with Dalvin Cook and Kenyan Drake, which is a very low-floor start, but it has nice upside if things click. I like to assume I’m right at the very top of the draft board (even though I’m actually not 100% sure I’m right) because we have to nail your first two or three picks to actually win no matter the strategy. If, for the rest of the draft, we’re hedging those initial picks, we’re leaving equity on the table. After those back-to-back RB picks, I waited until the 11th round to draft my next RB. Tevin Coleman, AJ Dillon, Justin Jackson, and Zack Moss are all zero RB targets and directly apply to the “bimodal RB” strategy I used here.

At receiver, I waited a little later than normal (only because Lamar Jackson and Mark Andrews fell to me in the 3rd and 4th round). I still managed to draft seven WRs between the 5th and 13th round, including four-straight in Rounds 5-8. A receiver group of Robert Woods, T.Y. Hilton, Marquise Brown, A.J. Green, Marvin Jones, Sterling Shepard, and Jamison Crowder is deep enough to make up for missing out on the consensus WR1s. Remember that this is a Best Ball league where I’m taking advantage of the week-to-week volatility of the position by having more quality options.

Only using one draft strategy is dumb. We have to adjust based on our draft slot and what our league-mates are doing, but for this year in particular, I’ve found myself liking teams with two early RBs and lots of mid-round WRs. This lines up with what historical fantasy data suggests, too. It’s been profitable to draft one or two RBs very early in drafts and then focus our attention on WR in the middle rounds. By using what I’m calling “bimodal RB” - a close cousin to “modified zero RB” - we’re banking on our first two RBs hitting, chasing WR depth to make up for the fact that we’re without a consensus WR1, and then following “zero RB” principles by drafting upside RBs in the later rounds. It’s not the safest way to draft, but we’ll finish in 1st place at a higher rate over time, and of course In fantasy football, if you’re not 1st, you’re last.