In this column, we're looking at pre-combine top-10 position rankings from three different angles: Traditional scouting evaluations courtesy of ESPN's Mel Kiper Jr (rankings can be found here), The Athletic's Dane Brugler (here) and Draft Wire's Luke Easterling (here), charting courtesy of Pro Football Focus (here) and analytics courtesy of Rotoworld's Hayden Winks (here). We've included graphs for each position to help visualize the collective rankings and their similarities and differences. We will check back in with each outlet in the weeks after the combine to see how ranks have changed (or not changed!)

A few notes on what sets are included before we get started. For this pre-combine exercise, Winks' rankings run through the skill positions but not the offensive line or defenders. Mel Kiper's rankings run through both the offensive and defensive sides of the ball, but because he specifically breaks down his interior o-line into guards and centers, and his linebackers into inside and outside linebackers -- the majority list only iOL and LB -- those hyper-specific sets are left out for now, to allow a more general view. And finally, we include the scouting average for each player between Kiper, Brugler and Easterling when applicable, to allow for a further data point.

Without further ado, let's dive in! 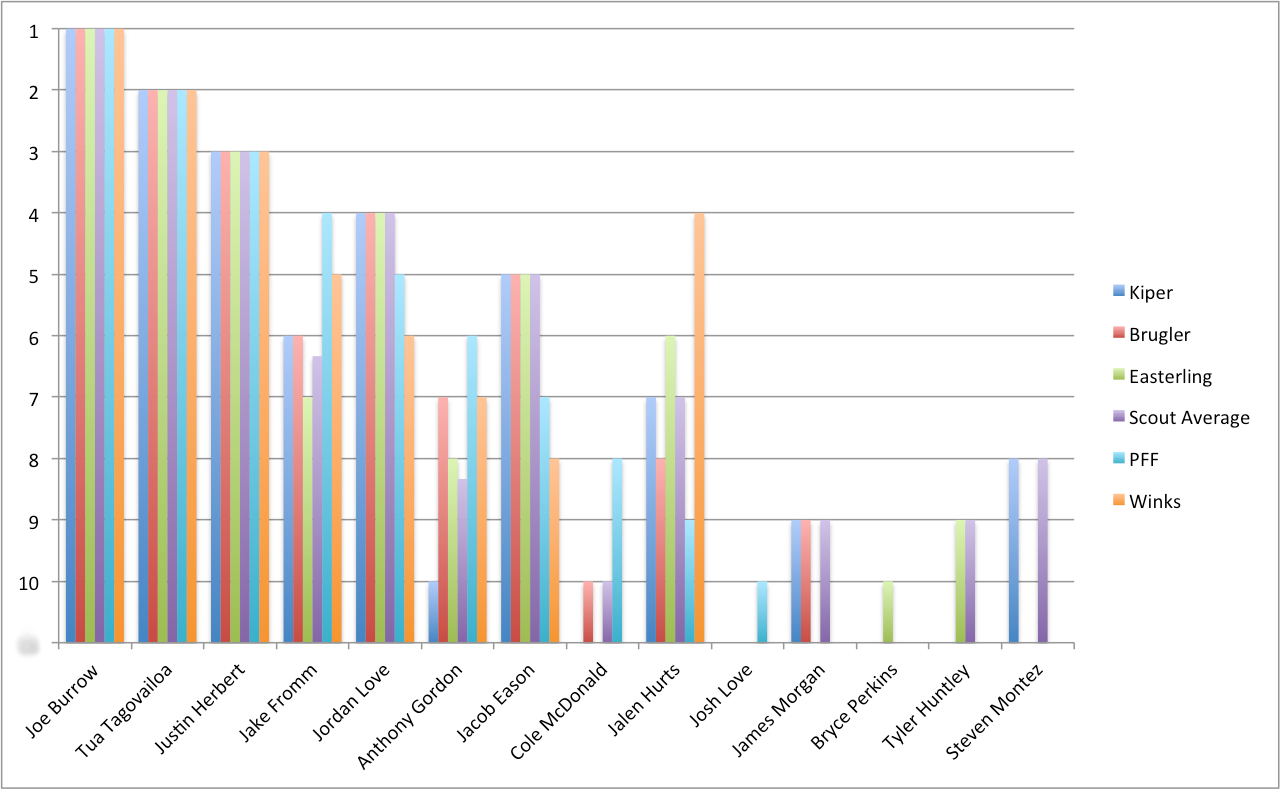 Lock, stock and barrel, across the board all three evaluating angles agree on Joe Burrow, Tua Tagovailoa and Justin Herbert as QB’s 1-3, respectively. Medicals in Indianapolis will be crucial for Tua, but to this juncture, this order doesn’t seem to be changing. Matters begin to get a little stickier after that.

While Draft Twitter loves to pummel Georgia’s Jake Fromm, PFF’s charting throws down for him at QB4, highlighting his safe game while noting that just seven of his 447 dropbacks in 2019 were plays which might have resulted in turnovers. That’s not flashy and Fromm’s misfires are easy to mock -- even PFF notes that 25.4% of Fromm’s throws were uncatchable in the fall -- but he’s a quarterback with a high floor of basic competency.

The same high floor of basic competency we talked on with Fromm is lacking in PFF’s No. 5 quarterback, Utah State’s Jordan Love. Our charters note that Love led the country interceptions on tight window throws. All three of our scouting evaluators rank Love as QB4, with Brugler citing his physical upside and Patrick Mahomes-esque ability to create out of nothing.

Perhaps the biggest statement at signal-caller comes from Hayden Winks, who ranks Jalen Hurts at QB4. None of our other outlets have Hurts higher than QB6 (Luke Easterling coming in, there), and Jalen doesn’t slot for PFF until QB9. That disparity between Winks and PFF -- five spots -- is the most for any quarterback in this exercise. 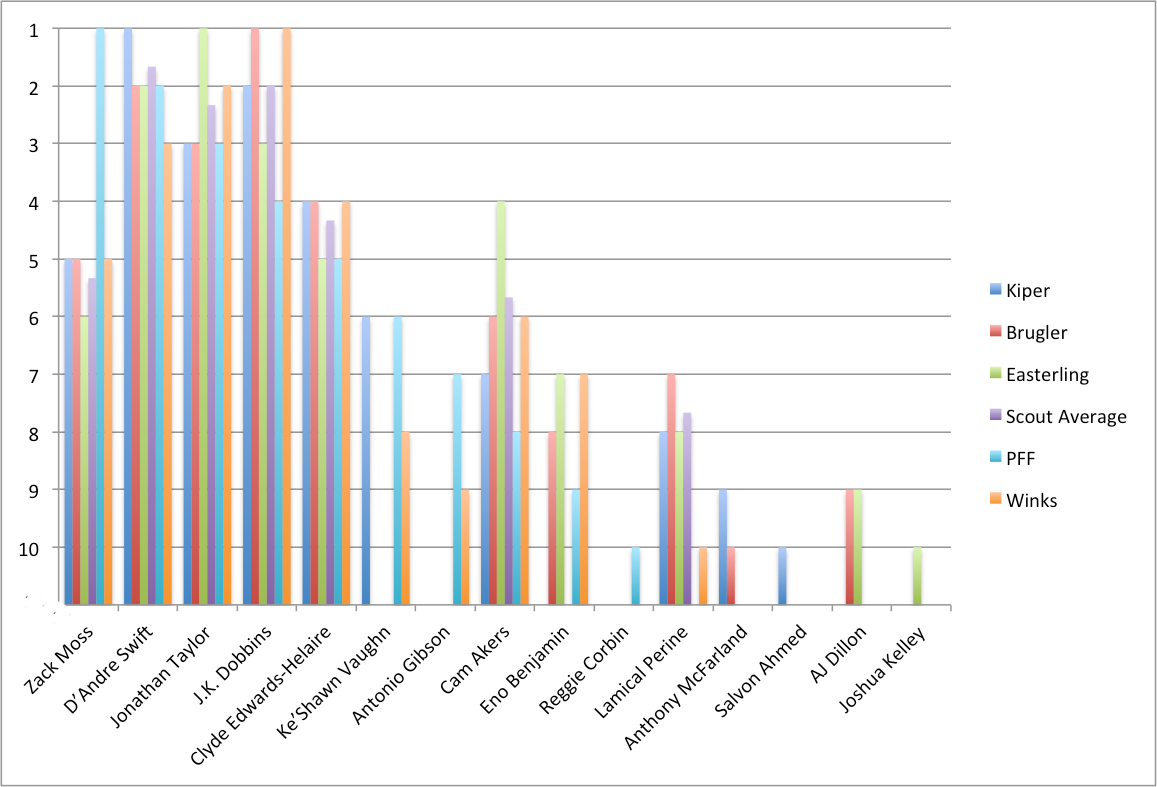 While matters were plenty settled at the top of the quarterback board, things start out with a bang in the running backs room, with Pro Football Focus showing up to the party with Utah’s Zack Moss ranked as their No. 1 back. Every other one of our evaluators waited until at least RB5 to throw in with the Utes standout. It’s Moss’ more shifty attributes which really have the collective jaws a-gape at PFF, with the outlet noting that “Moss has been consistently elusive to a level we've never quite seen before.”

After PFF’s turbocharging of Moss at No. 1 things ease up, with D’Andre Swift, Jonathan Taylor and J.K. Dobbins slotting through RB4. Also entering the fray at RB4? Luke Easterling with Florida State’s Cam Akers. Easterling is by far the most bullish on Akers, with Brugler and Winks next up with Mr. Akers but only at RB6. PFF doesn’t drop in the Florida State back until RB8.

Our most interesting lower-board rankings movement comes with Florida’s Lamical Perine, whom ranks for Kiper and Easterling at RB8. Brugler is even more keen on Perine at RB7. So our scouts are in line, there. Both our charters and analytics friends are a bit more conservative. Winks doesn’t forward Perine until RB9, while PFF does not rank him in their top 10 at all. 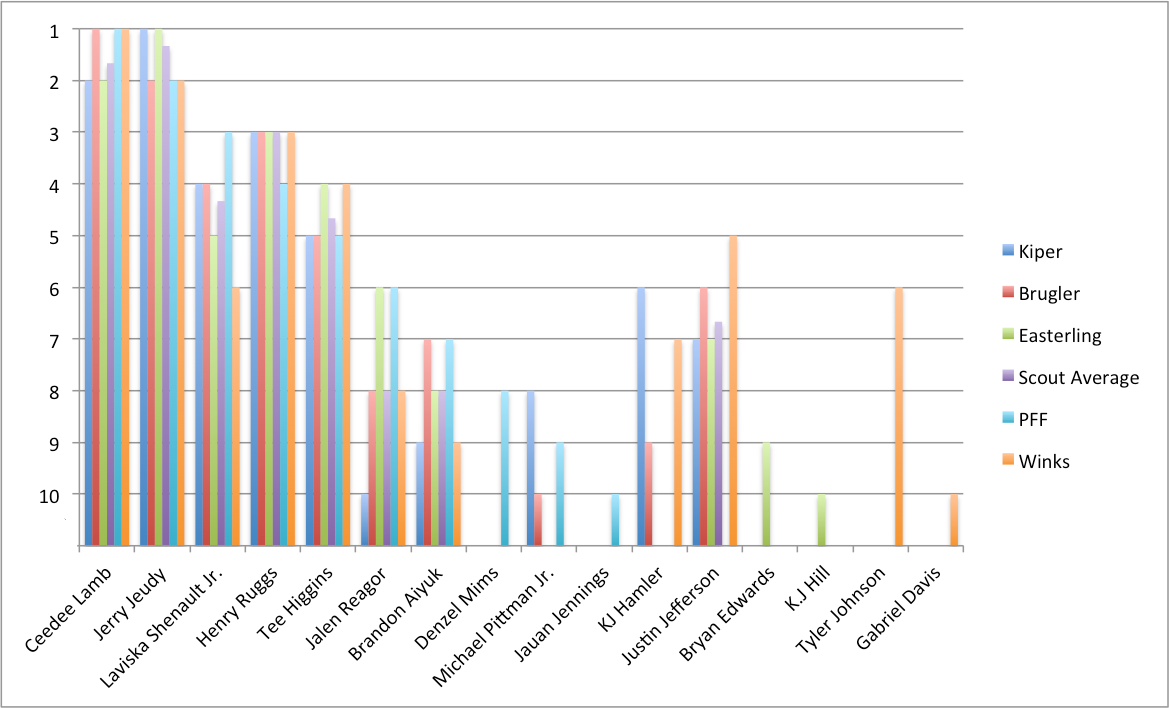 Across the board, scouts, charters and analytics comrades are in lock-step on Jerry Jeudy and CeeDee Lamb as WR1 and WR2 in one order or another. And we’re on mostly solid consensus across the board on Henry Ruggs, whom everybody except for PFF ranks at WR3. PFF floats him WR4, flipping CU’s Laviska Shenault up a rung for the third slot while nitpicking that Ruggs’ otherworldly speed can be disrupted with contact on routes. They love Viska’s elusiveness (see Moss, Zack) and note that Shenault’s 44 forced tackles missed over the last two seasons were the most in this receivers class.

Winks offers up perhaps the most off-the-beaten-path receivers group in the back half of these position rankings, ranging from Justin Jefferson at No. 5 (no other outlet has him higher than No. 7) to Tyler Johnson and Gabriel Davis at Nos. 6 and 10. He is the only one of our sources to rank either wideout within their top 10.

We’ll close out the receivers group with TCU’s Jalen Reagor, who drew a wide range in these rankings, with Easterling and PFF both seeming him home at No. 6. But Reagor barely makes the cut with Kiper. While he should put up a big 40-yard dash in testing this weekend, Reagor is going to make his money on whether or not he can show shake ‘n’ bake in the lateral agility drills. 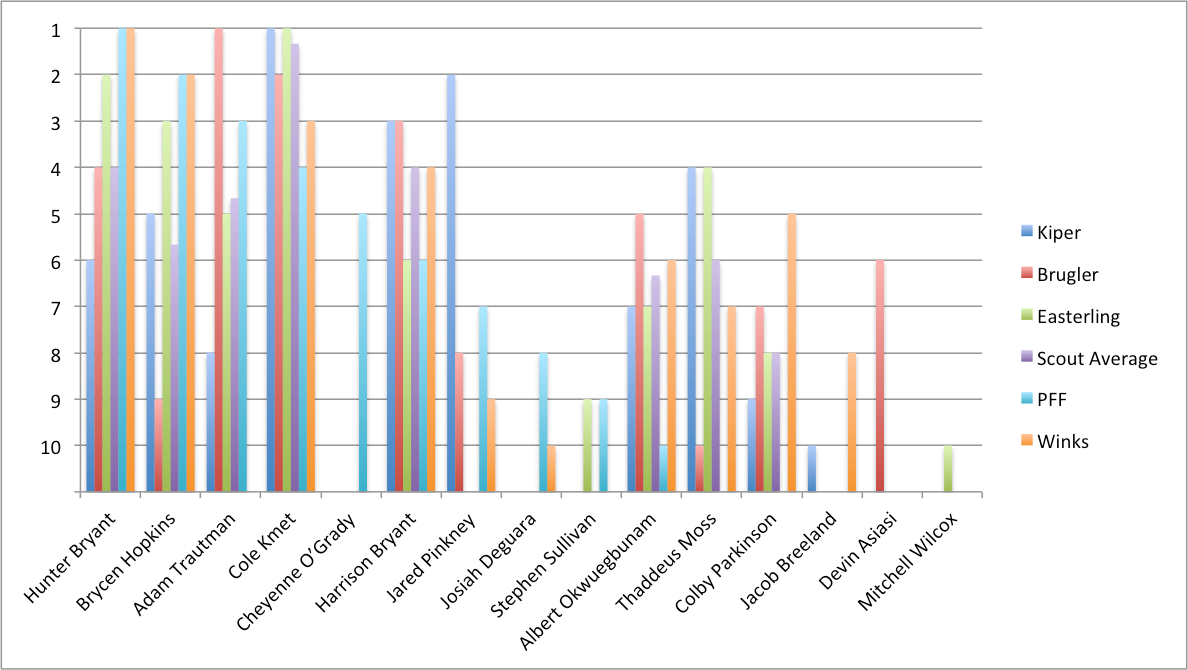 We’ll be interested to see how Hunter Bryant’s stock evolves over the coming weeks, because right now, the opinions range all over the map. Both Winks and Pro Football Focus rank Bryant at TE1, Easterling on their heels at TE2 (going out on an Adam Trautman branch at TE1), while Brugler holds off until TE4. And Kiper? Kiper doesn’t slot in Bryant until TE6. We would posit that reason for the disparity, here, would be the ever-present injury concerns with the talented Washington product, who already has a torn ACL and torn meniscus to his name. He’s a dynamo of an athlete when healthy.

There is a sizable disparity, too, with Purdue’s Brycen Hopkins. It’s another case largely of analytics + charters vs. the scouting department, with Winks and PFF both slotting Hopkins at TE2, followed by Easterling at TE3 before Kiper and Brugler come in more conservatively at Nos. 5 and 9, respectively. For all his ability as a receiver, Hopkins’ tendencies toward drops -- 22 over the past three seasons -- are tops in this position group.

Views on Thaddeus Moss run the gamut, from Kiper and Easterling slotting him at TE4, to Brugler at TE10 and PFF not at all. Analytics coming on to split the middle, then, with Winks rolling with the newly-minted champion at TE7. While Pro Football Focus loves Moss’ immaculate hands, they can’t abide by his lack of downfield separation or inability to do much outside of the underneath rage. 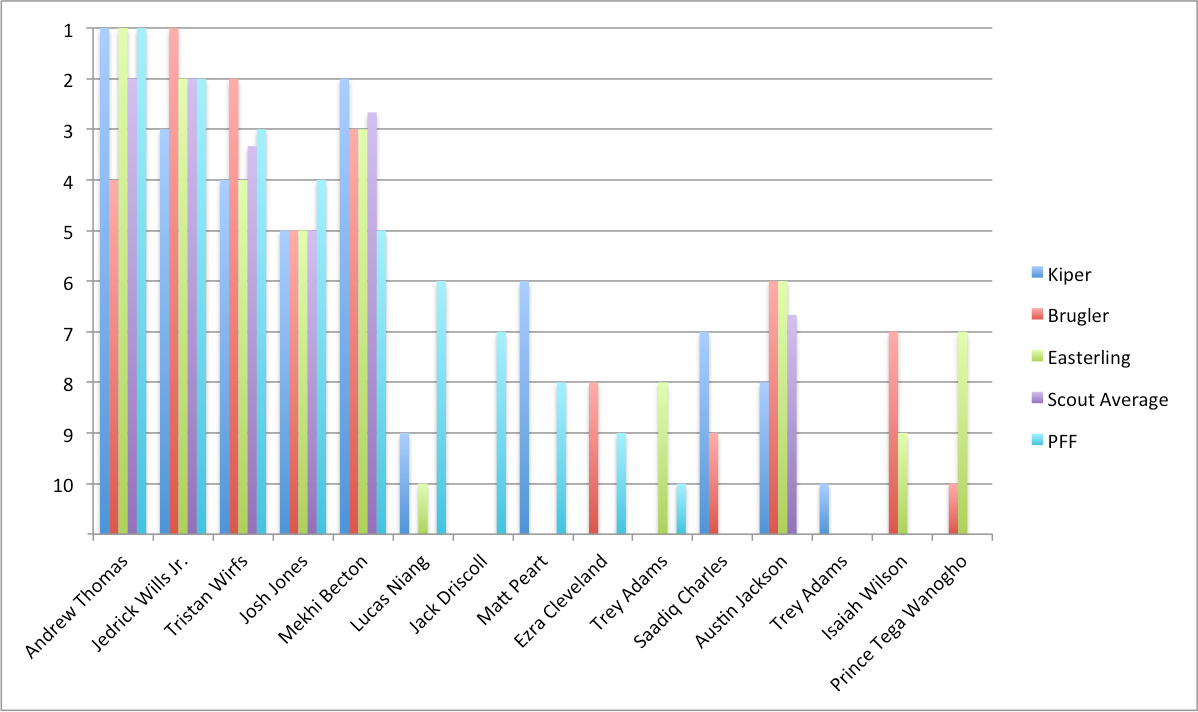 Houston’s Josh Jones finds the most agreement among our various evaluation techniques, with all three of the traditional evaluators slotting him at T5, a spot that Pro Football Focus would more/less see eye-to-eye on. They are slightly more keen, actually, ranking him as their No. 4 tackle prospect thanks to his immaculate work as a pass-blocker. Jones allowed just 18 pressures on 1,282 pass-blocking snaps these past three seasons. And also showed a monumental leap in run-blocking in 2019, grading out at 92.7 during the fall, after logging a horrendous grade of 62.8 in 2018.

USC’s Austin Jackson curries far more favor from our traditional scouts than from the boys at PFF. Both Brugler and Easterling are sky-high on his athletic upside ranking him at T6. Kiper lags further behind at T8, while Pro Football Focus leaves Jackson high-and-dry without a ranking at all. PFF questions his consistency and lack of physicality.

Trey Adams of Washington finds way onto just one board -- the lone tackle to make the cut on just one board -- with Mel Kiper Jr. slotting him at T10. An injury history, coupled with forgettable play in 2019 (forget the first-team All-Pac-12 honorifics) were cause enough to scare all other parties away from Adams. 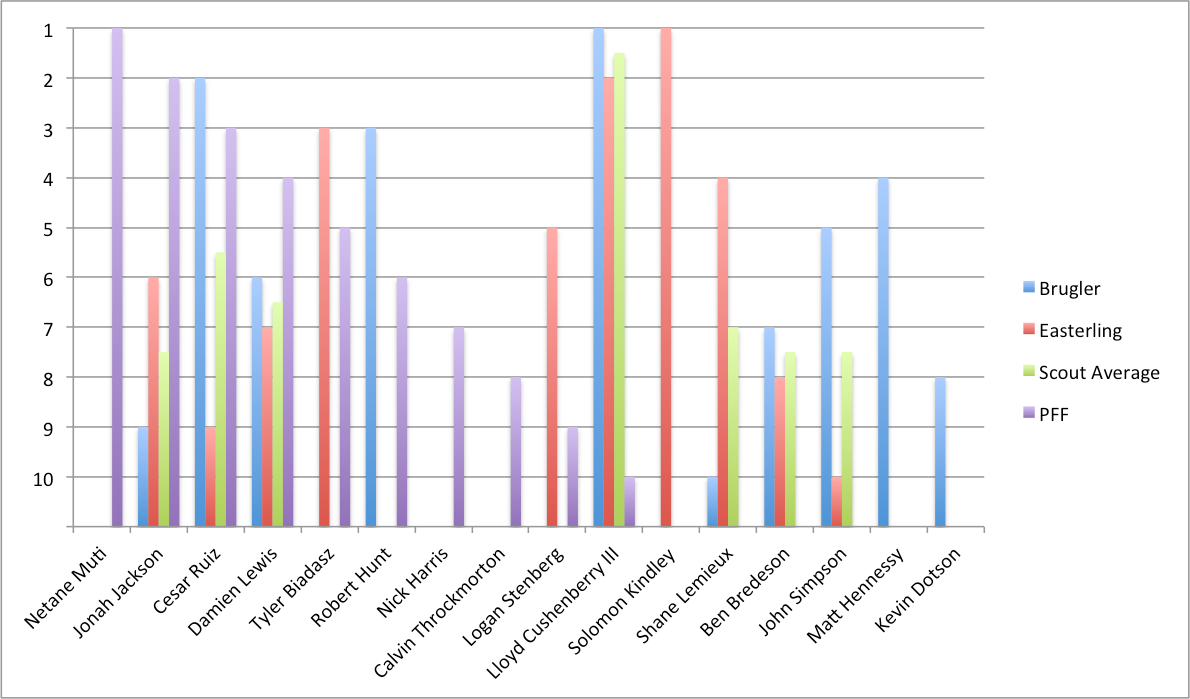 Chaos breaks out on the interior, with 16 total players ranking between Brugler, Easterling and PFF. Six of those 16 players did not make PFF’s cut, period. And one whom made the cut neither for Brugler nor PFF -- Georgia’s Solomon Kindley -- Easterling ranks as his No. 1 overall interior lineman. Egads. Kindley’s body is NFL-ready at 337 pounds, but where he loses PFF is in his lack of quickness and balance issues.

And to offer the flipside of one of the scouts ranking a player iOL with no backing from the charters would be PFF ranking Fresno State’s Netane Muti T1, with neither Brugler nor Easterling putting him top 10. PFF loves Muti’s ability to push boulders and unlike Kindley above, they like the fleetness of his feet.

Perhaps most interesting in this set of rankings is the large, large disparity between what the scouts are seeing in Lloyd Cushenberry and how the charters are viewing him. The former camp in Brugler and Easterling rank Cush at Nos. 1 and 2 respectively. PFF, not until No. 10 after Cushenberry’s overall grade cratered out from 77.1 in 2018 to 61 in 2019.