It's NFL season and that means you've got a chance at $100,000 with Sunday Night 7. Predict what will happen on Sunday Night Football and watch along to see if you'll be the next big winner. Click here to get started with the NBC Sports Predictor app.

Cousins flopped on Monday night but Vegas is predicting a rebound. The Vikings have the highest team total of the main slate and face a defense that has allowed nine touchdowns so far.

Minnesota has been a different team under Kevin O'Connell and I expect DFS players to keep backing the squad versus Detroit. My only concern with Cousins would be a lack of elite upside. Since the start of 2021, he has one 30-point game.

Including playoffs, Allen has topped 30 DraftKings points in each of his past four games. He could have gone for 40 in Week 2 if the Titans had put up a fight.

The Bills rank first in the NFL in pass rate over expected and they face a Miami defense placed last in yards per pass attempt and yards per play allowed.

Any time Mahomes is going to be outside the top two or three quarterbacks in ownership, I want to buy the dip. The Chiefs rank second in the NFL in pass rate over expected and Mahomes is playing slightly more aggressively this year. Per Pro Football Focus, his big-time throw rate and average target depth are both up versus 2021.

Stacking the MIN/DET game by pairing Cousins with Justin Jefferson and running it back with Amon-Ra St. Brown is going to be one of the most popular starts to a lineup this week. To get unique, the best way to approach this game is from the Detroit side. Goff has tossed six scores through two weeks and both of Detroit's games have hit a total of 73.

Cook is a workhorse back with a slate-high implied team total. He is also a six-point favorite at home. This is an incredible spot for him, but the field will certainly recognize that.

Montgomery has seen 71 percent of the Bears' running back carries and has a 21 percent target share. He has also taken the field for 86 percent of the team's third downs. Montgomery is the cheapest three-down back on the slate and he faces the Texans.

We're probably past the days of McCaffrey as the best fantasy running back to walk the Earth, but his peripheral stats are still strong. He has earned 83 percent of Carolina's running back carries and has run a route on 70 percent of Baker Mayfield's dropbacks. This is the type of volume we want to be buying when the field is even remotely worried.

Sanders has quietly emerged as a strong RB2 play. He has seen two-thirds of the Eagles' running back carries while running more routes than either of his backups. Per Next Gen Stats, he ranks seventh in rushing yards over expected.

This week, he's a touchdown favorite versus a Washington defense that ranks 27th in EPA per rush attempt allowed.

St. Brown has seen a 30 percent target share and caught at least eight passes in eight consecutive games dating back to last season. For good measure, he has 129 rushing yards in that span as well. The eight-game sample would be good for over 1,900 yards from scrimmage and 19 total touchdowns if it held for an entire season. St. Brown is the early favorite to be the breakout superstar of 2022.

An Allen, Diggs, and Miami receiver combo is the only other contender for the chalkiest stack of the week. Fading some of the value running back plays in that construction is a must.

Samuel is currently the Commanders' top receiver, seeing 20 targets in two games. He has turned that volume into a 15/133/2 line while also earning five carries. He will be a popular mid-range option until both sites price him up.

Both receivers are tied for second on the Chiefs in targets. They are also the only two KC wideouts with route rates over 75 percent. Chiefs receivers are going to be avoided in tournaments because, so far, they have been unpredictable. The routes and targets point to a clear top duo, and we want to be betting on the favorite targets of Mahomes.

The total of this game has dropped to 47.5, but that remains one of the top-five totals of the week. The line has also moved three points in Jacksonville's favor, meaning their team total has been unaffected by the falling game total.

Kirk is the perfect underdog receiver to target, because his quarterback will lean on him, and he's cheap. Trevor Lawrence has looked his way 18 times this year, giving him a 27 percent target share. The LAC/JAC game makes sense as a secondary stack or even a game stack in large-field tournaments.

In Week 1, Davis ran a route on every one of Josh Allen's dropbacks. He was the team's deep threat, averaging 16.4 air yards per target. Davis is trending toward playing in this game, but we won't know until late in the week. If that keeps his ownership in check, he will be a slam dunk tournament play.

Andrews is the only tight end with a target share or air yards share over 30 percent. Both of his marks are above that threshold. He also leads all tight ends in receptions. Shockingly, he is $1,000 cheaper than Travis Kelce on DraftKings.

Don't look now, but Higbee is your league leader in targets (20) among tight ends. His four looks in the red zone are second only to Zach Ertz. Higbee isn't an inspiring option, but he will be one of the most popular pay-down plays this week.

Kelce won't be unpopular by any means, but Andrews should enter Week 2 with a clear ownership edge over him. Coming off a 28-point game in a week when no other tight end topped 17 points, that seems reasonable. My only concern with Andrews is the game environment.

It's been a struggle for the Pitts supporters through two weeks, but there are still positive signs. He ranks fourth among tight ends in air yards share and has run a route on 82 percent of Marcus Mariota's dropbacks. Close games are also perfect for him. 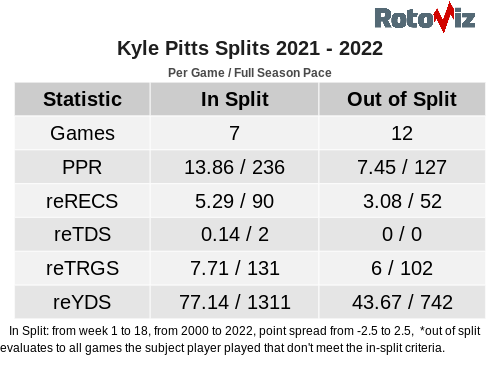 When the spread is under a field goal, Pitts has averaged 13.9 PPR points per game. When it moves beyond a field goal for either team, his average drops to 7.5 points. This week, the Falcons are dogs by a half-point to the Seahawks.

Pitts' price has dipped on both Fanduel ($5,600) and Draftkings ($4,800). He has loads of appeal on DraftKings based on his ability to return value with receptions and not needing a touchdown.