With all of their receivers expected to be back in the lineup, there's a chance the Bucs revert to the pass-first style they employed in 2021. This year, Tamp Bay ranks 25th in pass rate over expected. They are passing on just 59 percent of their plays.

A boon in pass attempts would be great for the entire team. If playing Brady at captain or MVP, I like betting on the Bucs to win this game through the air by adding at least two of his pass-catchers to the lineup.

Mahomes leads the NFL in EPA per play and is fifth in completion percent over expected. The rotating receiver room has played a role in the Chiefs' middling start, but Mahomes is still dealing. Unsurprisingly, Mahomes has the highest fantasy projection on DraftKings and Fanduel.

Fournette is averaging 19 carries and three receptions per game. His usage has been the product of Tampa Bay struggling to pass the ball, but an increase in pass rate may not be bad for Fournette. The Bucs offensive struggles have meant their running backs aren't seeing as many goal-line looks. Fournette has just one carry inside the five-yard line this season.

The answer to which receiver will step up in Kansas City was just Kelce all along. His 23 percent target share and 26 percent air yards share both lead the Chiefs. His aDOT of 8.9 is also a three-year high.

Evans has generally seen a downturn in all of his receiving stats when Chris Godwin is active. In the Brady era, he averages nearly four fewer points per game with Godwin on the field. 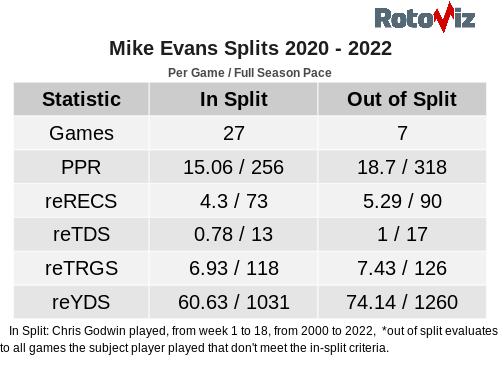 Godwin's health could limit him this week, but I don't mind trying to be ahead of the game on his return. Last year, Godwin was a top-five fantasy receiver before going down in Week 15. He was averaging seven catches for 79 yards per week.

The Chiefs' receivers have been difficult to decipher every week, but a top duo has solidified. Marquez Valdes-Scantling and JuJu Smith-Schuster have run a route on at least 75 percent of Mahomes' dropbacks in every game this year. The two have seen 19 and 18 targets respectively.

Mecole Hardman is playing fewer snaps but has a stranglehold on the WR3 role in Kansas City. His three red zone looks also rank second on the team. Hardman isn't a bad bet to find the end zone or get home on a deep shot, making him a solid pairing option with Mahomes.

Edwards-Helaire has at least three catches in every game this year. He is averaging a touchdown per game. He's been mostly ineffective on the ground, but he holds a strong role in the red zone for one of the league's best offenses.

Russell Gage and Julio Jones will round out the Bucs' receiving room. In Week 1, Jones ran four more routes than Gage and saw three more targets. He also got two rush attempts for the first time since his rookie season. The team was making an effort to get Jones involved before a knee injury sidelined him. As is always the case with Julio, the risk of him re-aggravating the injury is high, but there are worse bets to make in this game.

White set a career-low in offensive snaps last week, but Bucs OC Byron Leftwich said earlier this week the team will do more to get him involved. He's only $600 on DraftKings, meaning a pair of receptions may be all he needs to make the optimal lineup.

McKinnon only has 20 touches this year, but he does lead the Chiefs' backfield in routes run. Kansas City has deployed him as their primary option on passing downs over CEH.

The Bucs are favored at home and face a team ranked inside the top five in pass rate over expected. Their defense has generated pressure on 28 percent of passing plays, good for sixth-highest in the league.

Brate is coming off his best game of the year, a 5/52 affair on six targets. The return of multiple Tampa Bay wideouts could cut his target share, but Brate only needs a touchdown to make the optimal lineup. Given his history of red zone usage, he has a decent shot at finding the end zone.