Touch Shares While Leading and Trailing

Fantasy football is a weekly game. Matchups matter. Projected score matters. The point spread and projected game script also matter. Some roles, like the third-down running back for example, are dependent on the scoreboard. If the Patriots are leading at halftime, James White is not going to receive as many checkdowns compared to when his team is chasing points. The opposite can be said for a bulldozing running back like Carlos Hyde.

To put an exact number on how game script each player was in 2019, I dug into the @nflfastR database and found each player’s touch share (carries and targets divided by team plays) based on if his team was tied, leading, or trailing in the game. Please note that the touch shares are actually higher for players who missed games because I divided it by total team plays, and not just the team plays of the games the player appeared in. I set the minimum of 13 games to help offset the differences. Here are the results:

These players have higher touch shares when their team is leading.

Montgomery’s potential breakout is tied to the Bears improving as a team. He’s very run-dependent (242 carries to 25 receptions), and head coach Matt Nagy opted for a pass play 69% of the time while trailing last season, which was an above average rate compared to the rest of the league. Nick Foles or a healthy Mitchell Trubisky will have to play above expectations for Montgomery to be a strong RB2 on a weekly basis, but he may be an underrated DFS play whenever the Bears are home favorites. Chicago, however, only has three games on the 2020 schedule where they are at home and face a team with a below-average win total, per SharpFootballStats.com.

Both Chris Carson (+14% touch share while leading) and newly-signed Carlos Hyde (+11%) are run-first running backs. If healthy following his hip surgery, Carson is the better player, and the Seahawks reportedly “still intend on Chris Carson being their primary running back in 2020”, but it would be problematic if Hyde steals some of Carson’s work whenever the team has a lead. With that said, I expect Carson to be slightly more active in the passing game this season with Rashaad Penny somewhat likely to open the season on the PUP list.

The entire Rotoworld staff wants Jacobs to be featured more on third downs. He’s already a borderline top-five runner, and I think there’s enough to work with to utilize him as a checkdown receiver in passing situations. I’m less convinced the Raiders feel the same way as we do, however. They re-signed checkdown machine Jalen Richard this offseason and drafted Lynn Bowden Jr. (a receiver-converted running back) in the third round this draft. It will be difficult for Jacobs to break into the weekly top-8 running back conversation without more production whenever the Raiders are trailing.

This stat is propaganda for those who believe in Mixon as a late first-round fantasy selection this season. The Bengals only played 149 snaps on offense with a lead last season (second-worst behind the Washington at 119 snaps, lol), a number that surely will positively regress with better injury luck and Joe Burrow being plugged in at quarterback. Not only should Mixon be more involved if the Bengals play better in 2020, but Mixon should also score more touchdowns. Last season, he only scored five rushing touchdowns. My rushing TD model expected him to score 9.3.

Henry is a fragile first-round fantasy selection. Unless he takes on more third down work in 2020, Henry's performance is closely tied to how well Ryan Tannehill plays in 2020 because the Titans’ play calling is quite extreme. When their in-game winning percentage was over 75% last season, Tennessee only passed the ball 31% of the time. That pass rate climbed to 61% when their in-game winning percentage was below 25%. With negative regression coming for Tannehill (both expected touchdowns and expected YPA), I’m a tad worried that Henry’s carry totals drop from 303 to the 260-280 range. That would make Henry more of a borderline RB1/2 than the top-six RB that he’s being drafted as.

These players have higher touch shares when their team is trailing.

You thought Thomas was targeted a lot last year? Imagine what those target totals would be if the Saints somehow find themselves trailing more this season.

White is an affordable (ADP: RB38) target for those implementing a “zero RB” or “modified Zero RB” strategy this season in PPR leagues. If the Patriots are trailing more often with Jarrett Stidham or Brian Hoyer under center, then White will benefit greatly, especially with New England lacking proven pass-catching weapons right now. It’s possible that White sneaks into weekly flex consideration in PPR leagues and he’s being drafted after that.

Both Allen Robinson (+5% touch share while trailing) and Anthony Miller (+9%) benefit greatly in negative game scripts. That’s because the Bears only pass the ball 46% of the time when their in-game winning percentage is above 75%. Being tied to game script can be sketchy, but I’d argue it’s a good thing in this scenario. The Bears with Nick Foles and Mitchell Trubisky are likely to be either bad or average this season (their win total is set at 8 by Vegas), so we should see these two players targeted often in 2020. I like Robinson (ADP: WR13) and Miller (ADP: WR52) at their price tags.

Amari Cooper (+5% touch share while trailing) and Michael Gallup (+6%) were more involved whenever Dallas was chasing points last season. If we assume the Cowboys are better in 2020 like many analysts are projecting, it’s likely that these two are going to be extra boom-bust on a week-by-week basis. I think they will be highly efficient and productive in general, but their target totals could be all over the place, especially with first-round WR CeeDee Lamb in the building. I want pieces of this offense. I’m just mentally preparing for the lows that will be sprinkled into their highs.

Head coach Sean McVay called one of the most extreme offenses in the NFL last season. When the Rams had an in-game winning percentage of at least 75%, they used heavy 21-personnel (two tight ends) and passed the ball only 46% of the time. When the game script flipped and they were chasing points, the offense completely changed. The Rams passed the ball a league-leading 84% of the time and had the league’s fastest-paced offense (2.89 plays per minute) when the in-game winning percentage was 25% or lower. For these reasons, I’m in on most of the Rams passing game in fantasy football. Their floors are just so high. If they are playing well, the Rams’ pass-catchers are scoring touchdowns. If they are playing poorly, the Rams’ pass-catchers are seeing extra volume. 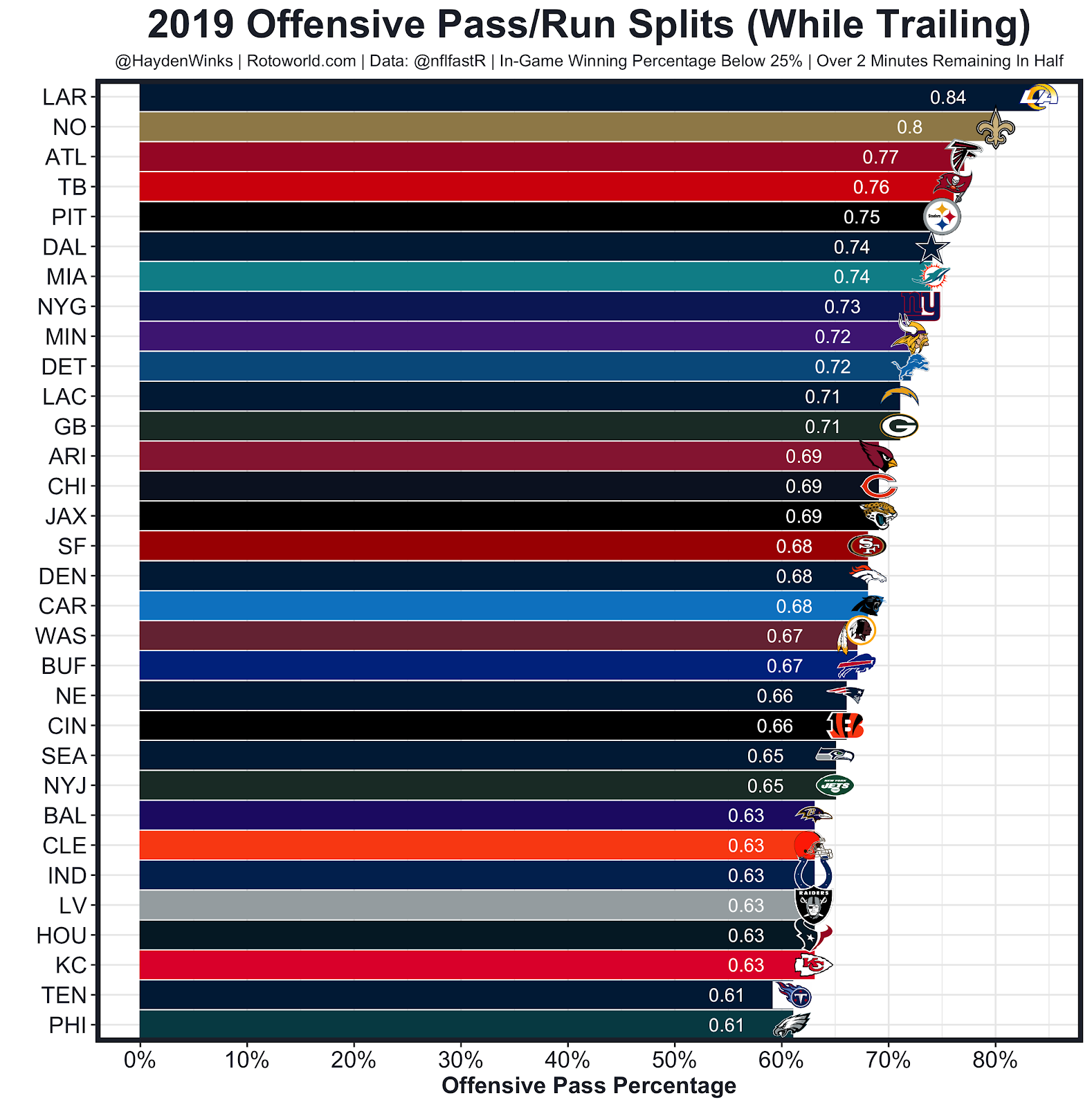 Touch Shares By Leading and Trailing

22. Win Rates: When Should We Draft WRs in Fantasy?

23. Touch Shares While Leading and Trailing