Skip to main navigation
By the Numbers

Kyler Murray was pressured on 34 percent of his dropbacks.

That was the second-highest pressure rate of the season for Murray according to Pro Football Focus. He was sacked six times by a Seattle defense that entered the week with eight total sacks. Over the past three weeks, Murray has been pressured on 33 percent of his dropbacks. The Cardinals have been without center Rodney Hudson for two weeks and left guard Justin Pugh left the team's Week 6 game early with a knee issue. Things are quickly going from bad to worse for Arizona's offense.

Surprisingly, Drake London has also been held below that mark in consecutive weeks. The Falcons are a top-five team in EPA per play on offense, so I don't see their philosophy changing anytime soon. Expect the bulk of the fantasy points from this team to continue coming via the ground game.

J.K. Dobbins rushed seven times for 15 yards while playing 16 snaps. Drake turned his 10 carries into 119 yards and a touchdown. John Harbaugh said Dobbins' knee “tightened up” early in this game. Dobbins hasn't played more than 50 percent of the Ravens' snaps once this year. He can be sent back to the bench in most fantasy leagues.

Singletary ran 17 times for 85 yards while catching four of his five targets. The Bills made Zack Moss a healthy scratch for this game, positioning Singletary to dominate the backfield. He did just that and has strong RB2 value going forward.

P.J. Walker became the first quarterback with negative air yards in a game since 2006.

A new circle was added to Hell on Sunday. 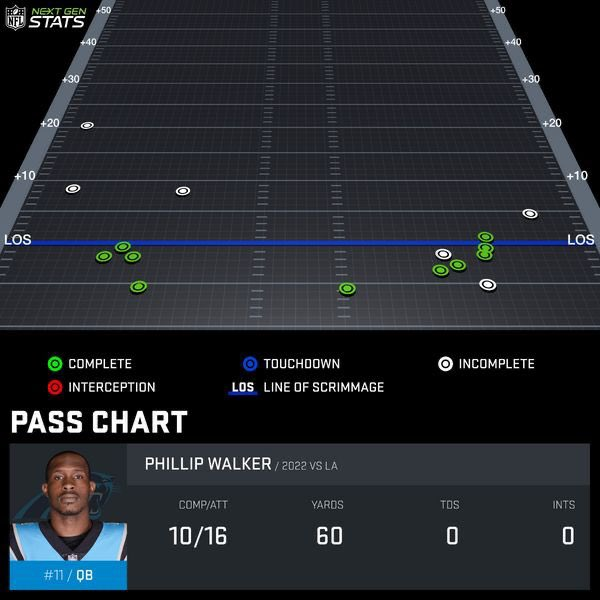 Taking over for an injured Baker Mayfield, Walker attempted 16 passes for a combined total of -1 air yard. Unsurprisingly, Christian McCaffrey led the team with eight targets. He turned that into 89 yards.

Thanks to Mark Hogan on Twitter for this stat.

Justin Fields finished as a QB1 for the first time this year.

Fields threw the ball a season-high 27 times. His 12 rush attempts were also the high-water mark of his 2022 season. Fields has topped 20 pass attempts in each of the past three weeks. His three best rushing totals of the year have also come in that span. Putting the ball in his hands more might not get any wins on the board, but it will put him on the fantasy radar.

The Bengals have a nine percent pass rate over expected in the past three weeks.

Cincinnati's PROE through the first weeks was almost perfectly neutral. Since then, Zac Taylor has loosened up and let Joe Burrow sling it more often. The higher PROE has also made Burrow even better. His touchdown rate is up one percent and his YPA is up 1.3 in his past three games.

Nick Chubb played one snap in the red zone.

Kareem Hunt got five red zone snaps, but Chubb saw the only carry. It was a short rush from the 20-yard line. Chubb has 18 red zone carries and Hunt has 16 this year. Hunt has four targets in the red zone while Chubb does not have a high-value target. Chubb's elite rushing prowess has masked his weak role. The gap between him and Hunt is closing.

CeeDee Lamb is the only receiver with at least eight targets every week.

This stat was true in Week 4, so it's insane that Lamb has been able to keep up the pace for a few more games. With Dalton Schultz no longer a part of the plan and no receivers beyond Michael Gallup making an impact, Lamb could lead the NFL in targets once Dak Prescott returns.

The rookie saw three targets and posted a 2/44/1 line in his first game off injured reserve. The team also healthy scratched Albert Okwuegbunam. Dulcich may be the best streaming tight end for the remainder of the season.

Rodgers has thrown 65 percent of his passes shorter than 10 yards downfield. Without Davante Adams, the Packers don't have a receiver who can win deep. They also don't have a receiver who can beat man coverage. Allen Lazard leads the team with 2.2 yards per route run against man. That ranks 32nd among all receivers. The Packers are, unsurprisingly, facing man at one of the highest rates in the league.

In his first career start, Deon Jackson scored more fantasy points (28.1) than Jonathan Taylor has in a single game this year.

Jackson got the start with Taylor and Nyheim Hines both out. He saw 12 of the team's 15 running back carries and secured all 10 of his targets for 79 yards. Jackson went down with a quad injury late in Week 6 but proved he can be a workhorse back if Taylor misses any more time.

Etienne has been the Jags' leader in running back snaps in every one of their losses this year. He normally gets over 50 percent of the snaps in losses, but the team gave JaMycal Hasty some run in this game. In any game Vegas predicts Jacksonville to lose, Etienne should be a safe bet for RB2/3 numbers.

JuJu Smith-Schuster topped 100 yards in a regular season game for the first time since 2019.

Week 6 was JuJu's best game by yards since the end of the 2018 season, though he did top 100 yards in the playoffs a year ago. It's been a tough start to the year for the former Steeler, so his 5/113/1 line was a welcomed change. JuJu has run a route on 82 percent of Patrick Mahomes' dropbacks this year. As long as that holds, we can keep betting on him.

Justin Herbert's average target depth is one yard lower than in 2020 and 2021.

Over 70 percent of Herbert's attempts on Monday Night Football were shorter than 10 yards downfield. The offense has gone into its shell with a beat-up offensive line and no Keenan Allen. The biggest beneficiary is Austin Ekeler, who is on pace to tie Christian McCaffrey's record of 116 receptions in a season.

Tyler Higbee has a higher rate of his passing snaps as a blocker in four consecutive weeks.

With the Rams' offensive line in shambles, Higbee has been asked to stay in and block more often than usual. This has also resulted in his target totals dropping in three straight weeks.

Exactly 30 percent of Tyreek Hill's 150-yard, games in the regular season have come with the Dolphins.

Only six percent of his career games have been with the Dolphins. Hill picks up a few more blowup outings when looking at the playoffs, but the numbers are staggering either way. He has reached 160 receiving yards three times in six games with the Dolphins.

Smith was on the field for the vast majority of the team's passing plays, but he spent a quarter of those reps serving as an extra blocker. He did manage to save his otherwise unremarkable day with a short touchdown. His season-high in receiving output sits at 42 yards. Smith is nothing more than a TE2.

Rhamondre Stevenson has 50 touches over the past two weeks.

The Pats were without Damien Harris in Week 6 but did have Pierre Strong and Kevin Harris active. The two combined for four carries and no targets. Harris could be out one more week with his hamstring issue. If that is the case, there's a strong argument to rank Stevenson as an RB1.

Alvin Kamara's target share is up five percent with Andy Dalton under center.

Kamara had a 15 percent target share with Jameis Winston at the helm, but that only resulted in five receptions for 19 yards in two games. He has 12 catches for 116 yards in as many games with Dalton. If Winston is back this week, Kamara's stock will take a hit.

The rookie has slowly been working his way into a larger role, and that manifested in his first career receiving touchdown last week. He also saw a 19 percent target share. With the Giants desperate for pass-catching talent, their every-down tight end should be on the radar as a streaming option.

Elijah Moore had zero catches on a season-low in snaps.

Moore's snaps have fallen in three consecutive weeks. So have his reception totals. He's being phased out of the offense and isn't happy about it.

He can be dropped in all season-long formats.

That is the most carries Philly's backups have seen in a game this year. Miles Sanders, who ran 17 times for 71 yards and a score, saw 62 percent of the team's running back carries. He was at 74 percent through five weeks, so it's possible something is developing here. For now, Sanders remains in the RB2 ranks.

Mitch Trubisky has a -2.9 completion percentage over expected.

Kenny Pickett, on the other hand, has a 4.3 CPOE. Despite Pickett struggling with turnovers, a handful of which weren't entirely on him, he also has a better mark in EPA per play. Trubisky may start this week after Pickett left Week 6 with a concussion. If he does, all Steelers players will get a downgrade.

Brandon Aiyuk led the 49ers with a 27 percent target share.

Aiyuk has generally taken a backseat to Deebo Samuel with Jimmy Garoppolo under center, but this game gave fantasy managers hope that he can hold his own. He posted an 8/83/2 receiving line on 11 targets. Deebo and Kittle still project to pace the team in targets, but it could be a flatter distribution going forward.

Walker dominated the carries for Seattle two weeks ago, and that held through Week 6. He only ran 15 routes, but walker will get every carry and a couple of targets on an offense that is playing surprisingly well.

He also passed the eye test. Walker will be a high-end RB2 going forward.

The Bucs have scored more than 20 points once this year.

The Bucs were held under 20 points three times last year. With the return of some of their receivers, Tampa Bay has had a strong pass rate in recent weeks. That's a better setup than their run-heavy start, but the team is still a long way off from where they have been in the past two seasons.

Brian Robinson had eight or more yards to gain on 71 percent of his carries.

Robinson ran 17 times, 12 of which came on first or second down with at least eight yards to go. The entire offense was set up for failure by being put on its heels going into second and third down.