Let’s get this out of the way early. … Running backs don’t matter. The make a very minimal contribution to a team’s success, and they’re largely replaceable. Using a top-20 pick on one is not a good move approximately 99% of the time because of the talent you can find in the later rounds and they just don’t help a team’s chances of winning very much.

But let's move on. ... The mission of this column is to find what parts of an NFL prospect’s profile actually matter, so we can find mid-round running back prospects we like and so we can make better fantasy football decisions. It’s not to find which running back to draft with the 10th overall pick in the draft because that back doesn’t exist. … These are the type of questions that will be answered: Does a running back’s college yards per carry matter to overall NFL success? What about just for his NFL YPC? Has the 40-yard dash been correlated to NFL PPR fantasy points? The list goes on and on, but this column will answer a lot of those questions.

The chart below will look complicated, but it’s really not. The left side of the chart is the college stats, and the top of the chart is the NFL stats. The darker the color (either green or red) the more correlated the two stats are. If there isn’t a lot of color in the cell, then the two stats have little to zero relationship. Here’s a short video if you’re confused. Lastly, the NFL data is for NFL seasons two through four (not the rookie season) because that’s when an NFL team is seeing the biggest returns on the draft pick, and it helps us avoid games where players were barely used. … The numbers shown in the chart are correlation coefficients. If you want R-squared, just square the number. I chose correlation coefficients to show positive and negative correlations with color. 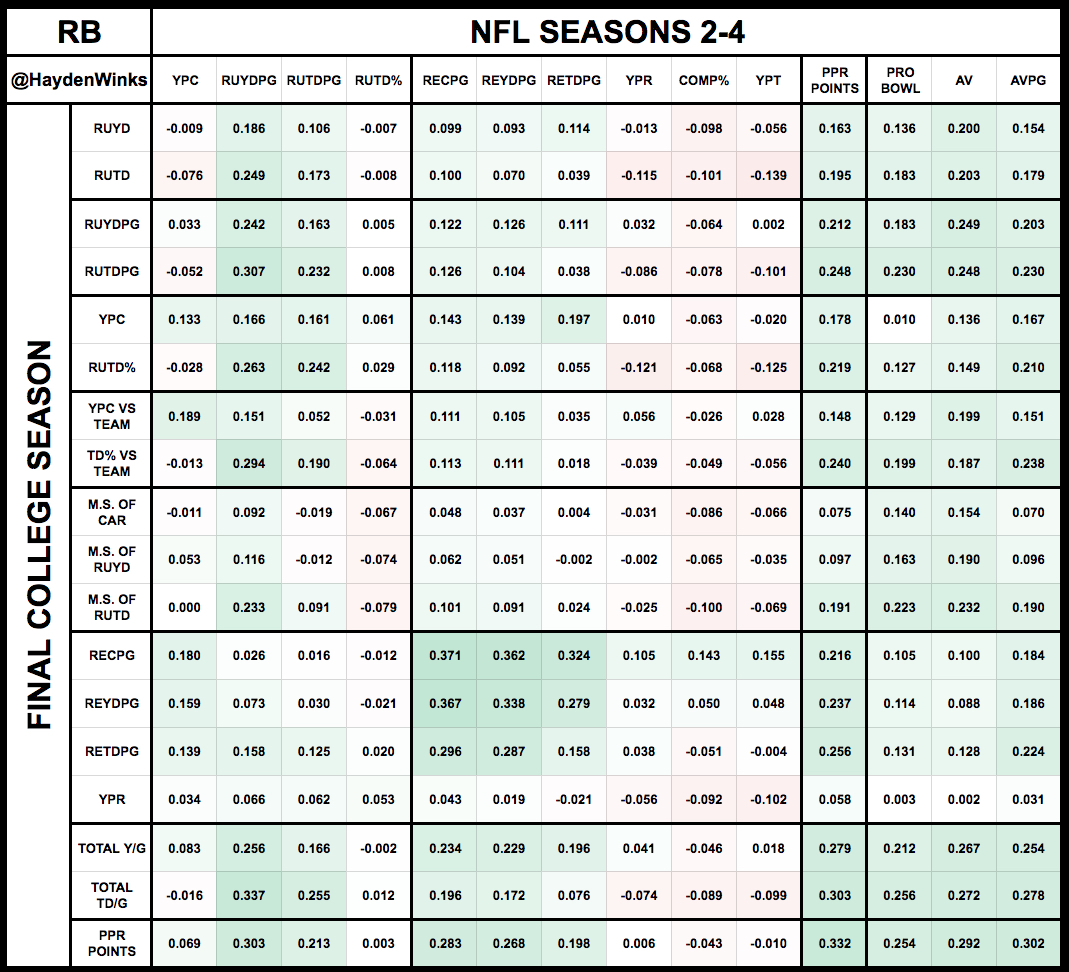 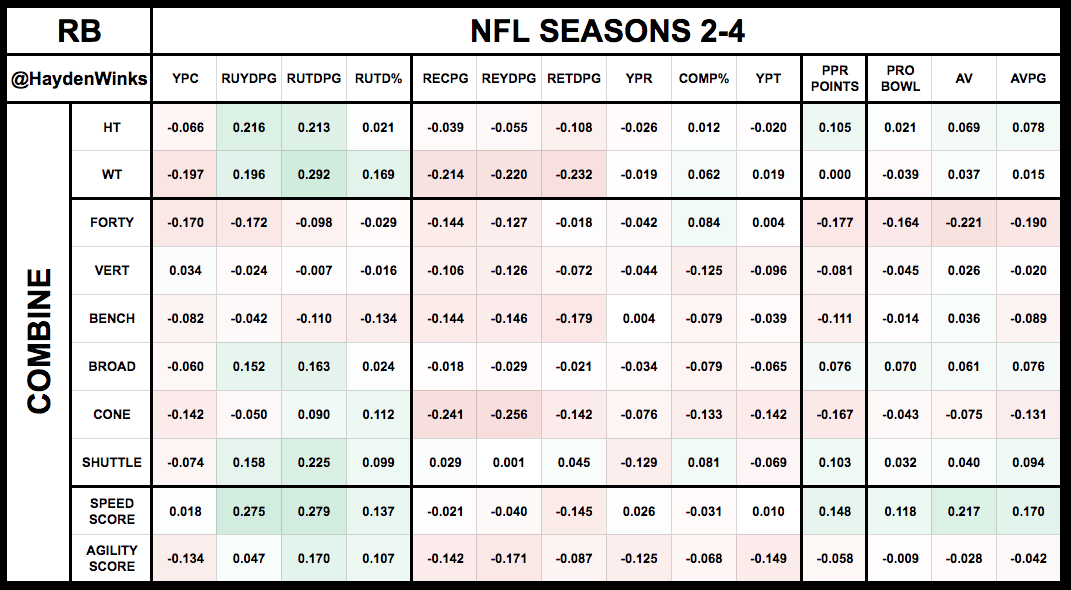 Data notes: The running backs sampled (n=206) met the following requirements: Had a total Approximate Value of at least 2.0 during NFL seasons two through four and were drafted between the year 2000-2017. Some of these running backs that qualified didn’t play in the FBS, so their college statistics were omitted, but I kept them in the sample while researching the NFL Combine. It’s up to you if you want to extrapolate these college production/efficiency findings to the FCS level. Also, not every running back participated in the NFL Combine, but the sample (n=190 for the 40-yard dash) is large enough to take these NFL Combine results seriously. The reason I choose the year 2000 was to keep the sample large enough to have reasonable results, but not too far away from “Today’s NFL” that is vastly different than the 1980s. Lastly, since this sample is looking at NFL seasons two through four, it’s up to you to extrapolate these findings to rookie seasons and seasons coming after the rookie contract. I’d guess that the data would change marginally, but the major takeaways would more-or-less stay the same. … In order to establish a baseline for what “NFL success” is, I’ve decided to use Pro Football Reference’s Approximate Value statistic. While not perfect, it’s a good enough metric for the column (and it will help me analyze all positions, which will ultimately let me produce an Analytics Top-300 Big Board). If you aren’t familiar with approximate value per game (AV/G), here is how the top 2018 NFL RBs finished in AV. In general, the NFL-caliber starters have an AV/G of 0.50, and the studs are above 0.75 AV/G. Knowing this will help you as you scan the charts on Page 2 and 3.

Statistics that have historically NOT been correlated to early NFL success (AV/G) for RBs:

Statistics that have historically been slightly correlated to early NFL success (AV/G) for RBs:

The first takeaway from the rankings I had was, in general, college touchdowns matter more than college yards. Five of the top-seven metrics I studied were touchdown metrics, and one of the others is PPR fantasy points, which obviously includes touchdowns in the formula. So six of the top-seven stats are touchdown-based. From now on, I’ll be really paying attention to touchdown scorers.

I went into this thinking that the NFL Combine results would have been higher on the list, so I was surprised that only two of the combine metrics finished inside of the top 15. Of them, 40-yard dash and Speed Score seem to be the most correlated to early NFL success for running backs, but we’ll get to that in more detail on Page 2. 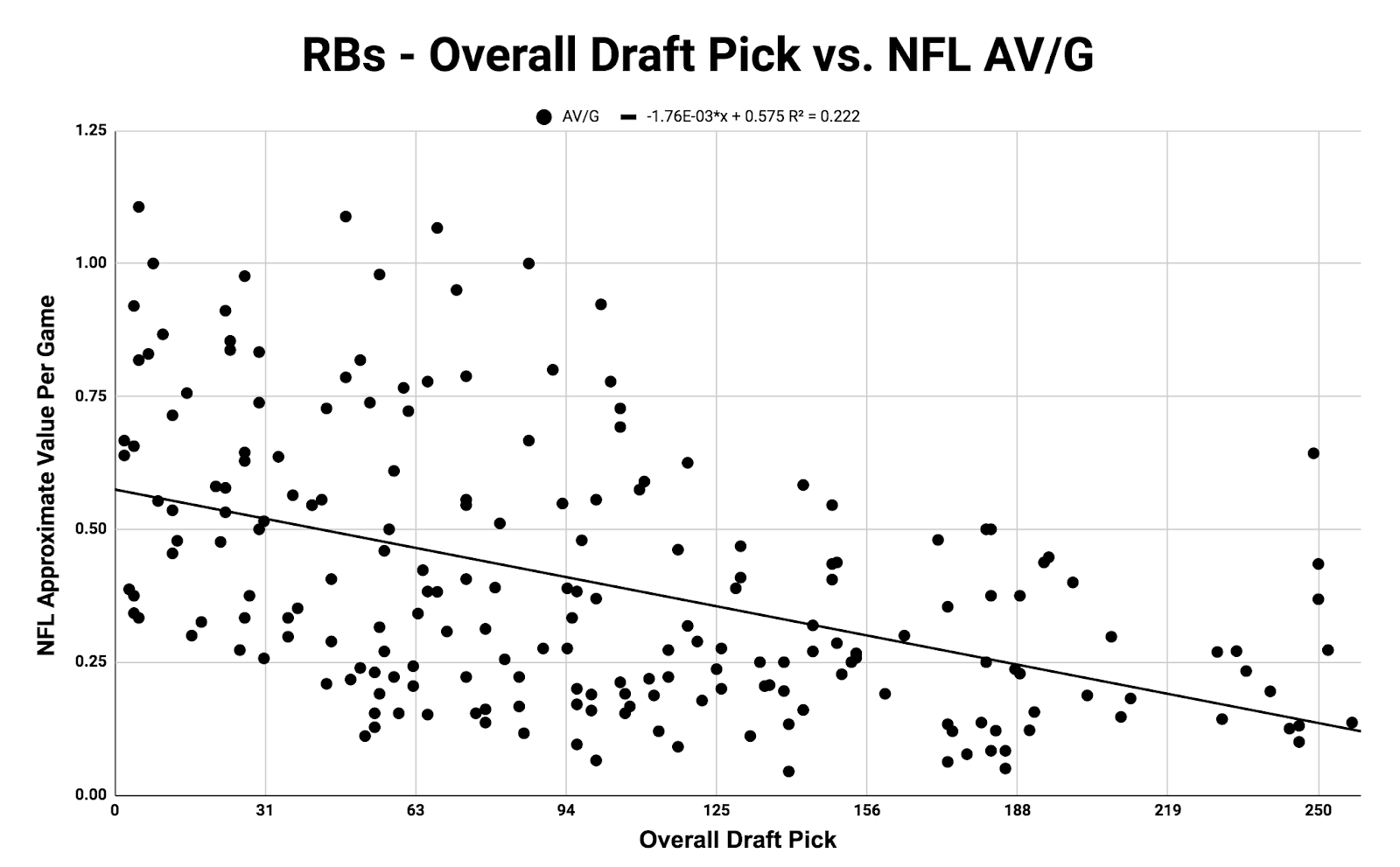 The NFL Draft largely remains a total guessing game. The R-squared between the overall draft pick and a running back’s approximate value per game in NFL seasons two through four is just 0.22, meaning only 22% of the variation in a running back’s NFL success can be explained by his overall draft position. But it’s important to remember that overall draft position leads to more playing time, even if it’s unjustified. The decision makers have the incentive to keep their own jobs, so they really don’t want to sit their high draft picks. This inflates the R-squared between overall draft pick and NFL success for all positions. Regardless, if a running back isn’t taken in the top-150, it’s usually bad news, but don’t tell Phillip Lindsay that.

All of the NFL Combine statistics are overrated by the media, analysts, and teams. They aren’t completely useless, but it is smart to buy-low on running backs who had mediocre measurables and to sell-high on running backs with really good Combine results. However, the 40-yard dash, Speed Score, and broad jump have had slight correlations to various NFL statistics.

We will get away from overall early NFL success and look at what’s correlated to individual statistics like fantasy points, rushing yards, rushing touchdowns, receptions, receiving yards, and receiving touchdowns. There are some interesting findings when we begin to plot these data points on graphs. Join me!

Which stats have historically mattered for PPR fantasy points for running backs? 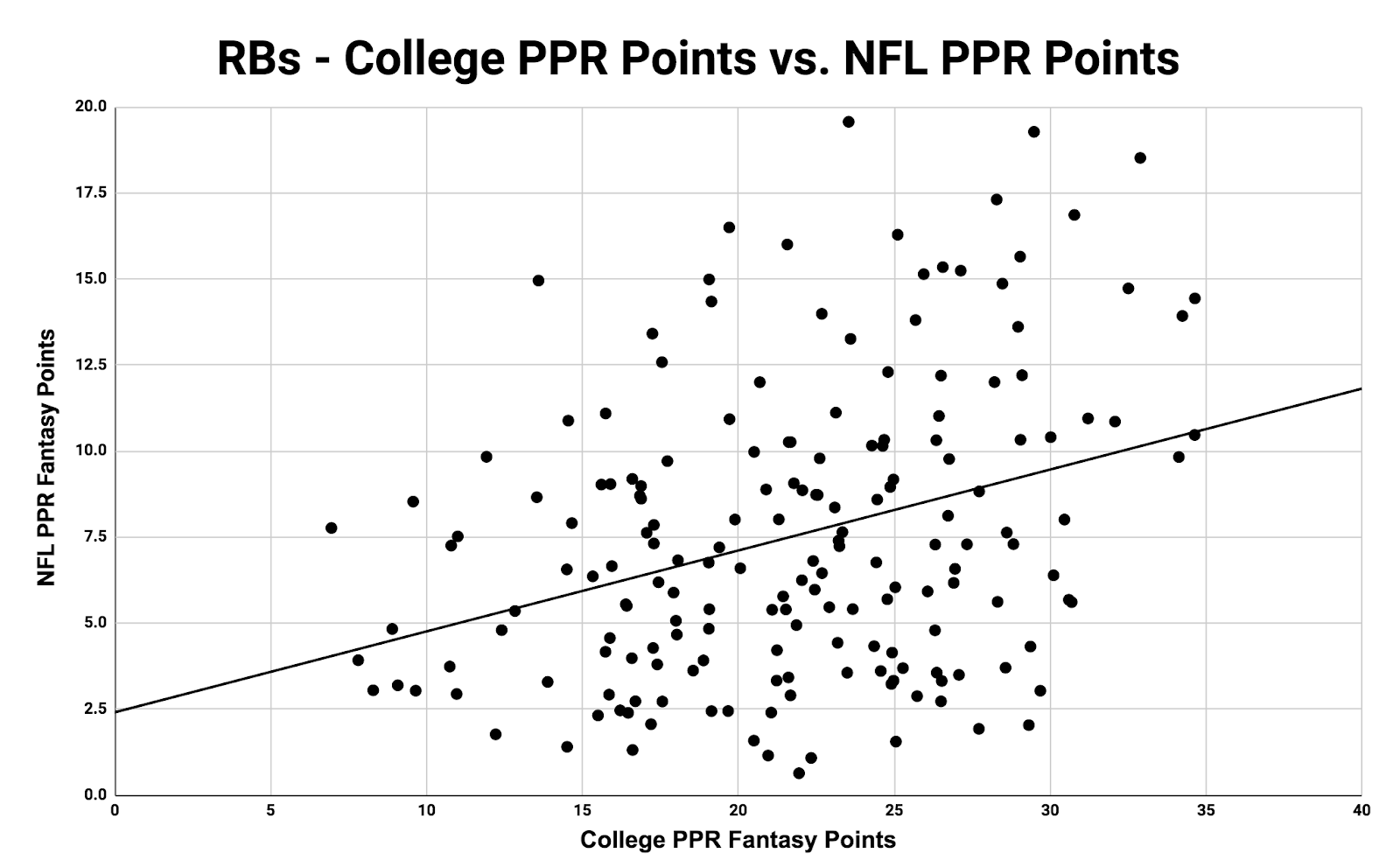 The R-squared of the overall draft pick is 0.23, but here are the rest:

There are models out there that are more predictive than these any of these, including the overall draft pick. I’m building them now and you’ll see the results of them after the NFL Combine but make sure to follow Peter Howard on Twitter (@Pahowdy) for high-quality analysis stemming from his database of prospects.

Do college receiving stats translate to the NFL?

Sorta. Out of every combination of stats in the study, the strongest correlation between two stats was college receptions per game and NFL receptions per game. The second, third, fourth, and fifth strongest relationships in the sample were also college receiving to NFL receiving stats. As you can see in the chart, it’s rare for a running back who didn’t catch passes in college to catch passes in the NFL. Just look at this graph below: 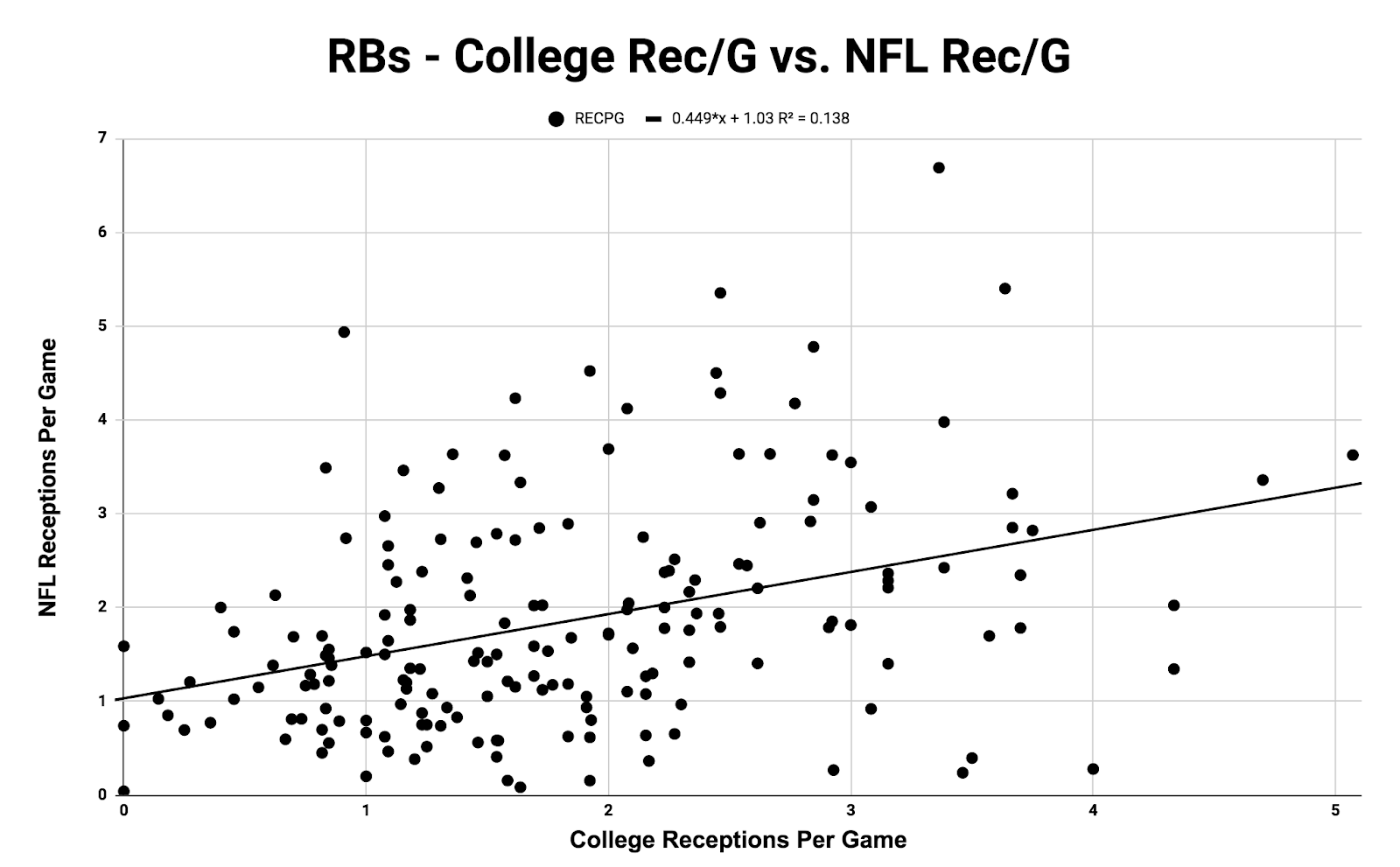 What does the NFL Combine tell us about individual rushing stats? 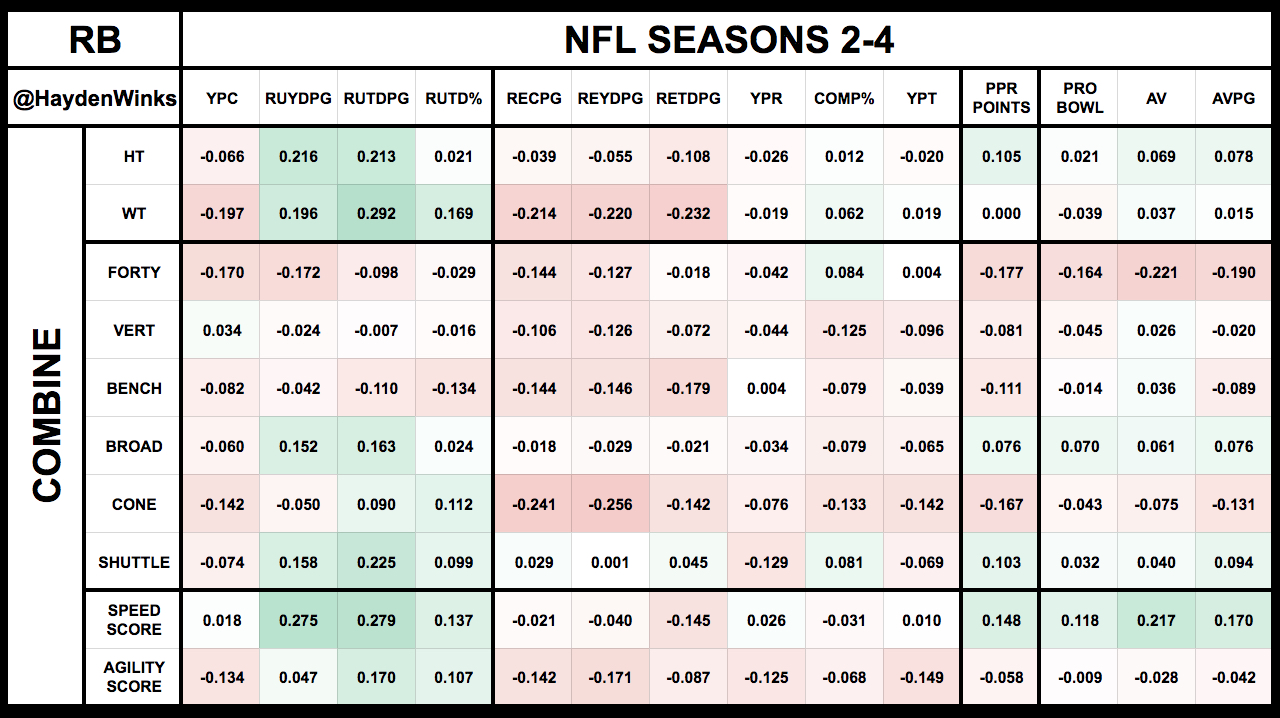 As you see in the chart above, height and weight have largely not been correlated with NFL success, but there are certain NFL statistics that have been weakly correlated to size. No surprise here, but NFL Combine weight and NFL rushing TD/G have at least some correlation. Heavier running backs also have a slight correlation to more rushing Y/G, but that’s not because of better efficiency. The heavier a back is, the lower their NFL yards per carry. Heavier backs also have performed worse in the receiving categories. All of this makes sense to me.

The 40-yard dash checked in as the 9th-most correlated stat to approximate value per game, but it also has been correlated to many individual NFL stats like rushing yards per game, YPC, and receptions per game. In general, faster running backs have slightly better efficiency and production numbers in both rushing and receiving. Where the 40-yard dash hasn’t shown correlation is in rushing TD%, receiving TD/G, YPR, and YPT.

Can we dig a little deeper into the NFL Combine stats? 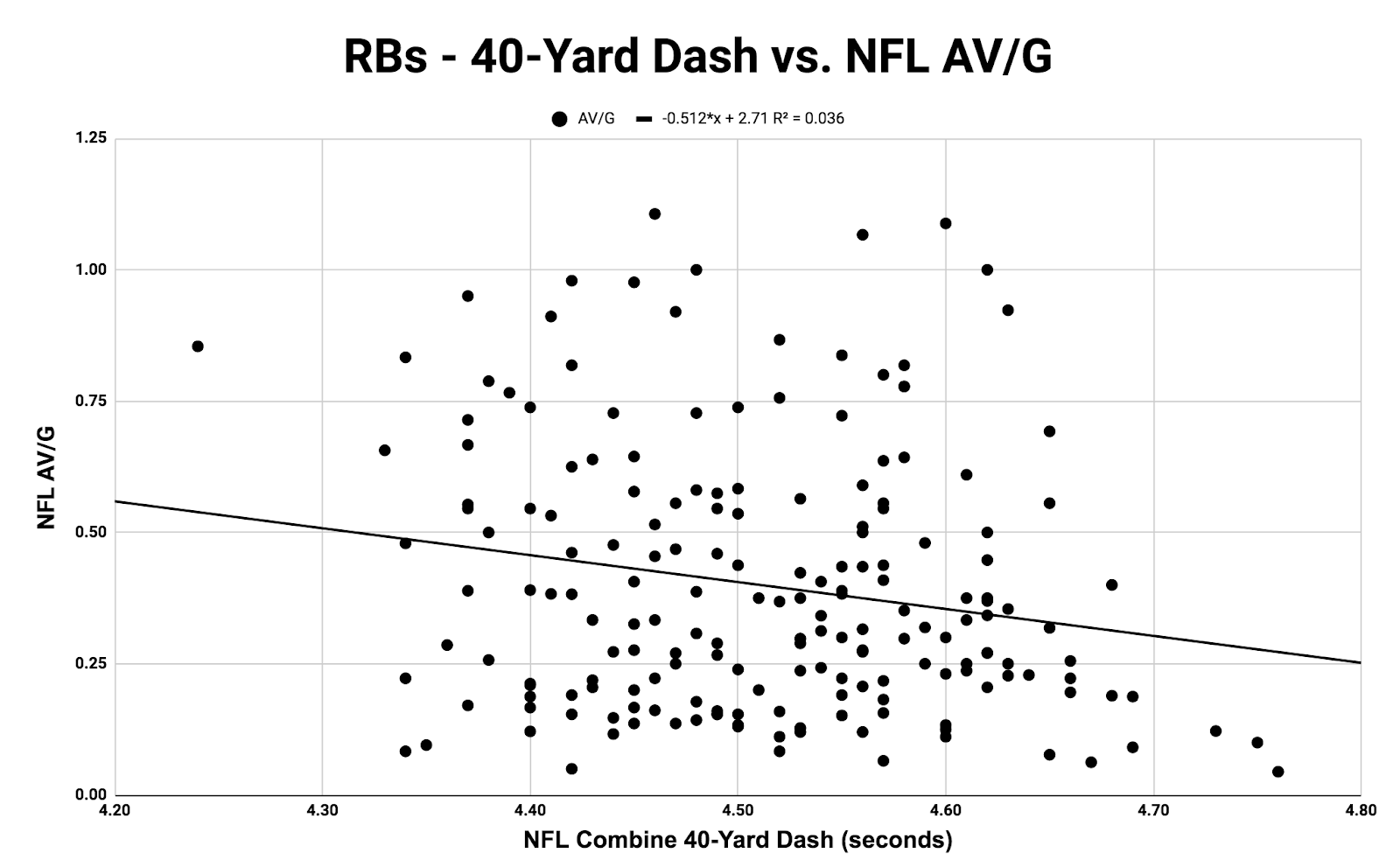 First of all, Chris Johnson is a freak. Secondly, there’s not a whole lot to learn here. It’s pretty clear that running slower than 4.65 is a death wish, but we all knew that. But what happens when we adjust for size using Speed Score? 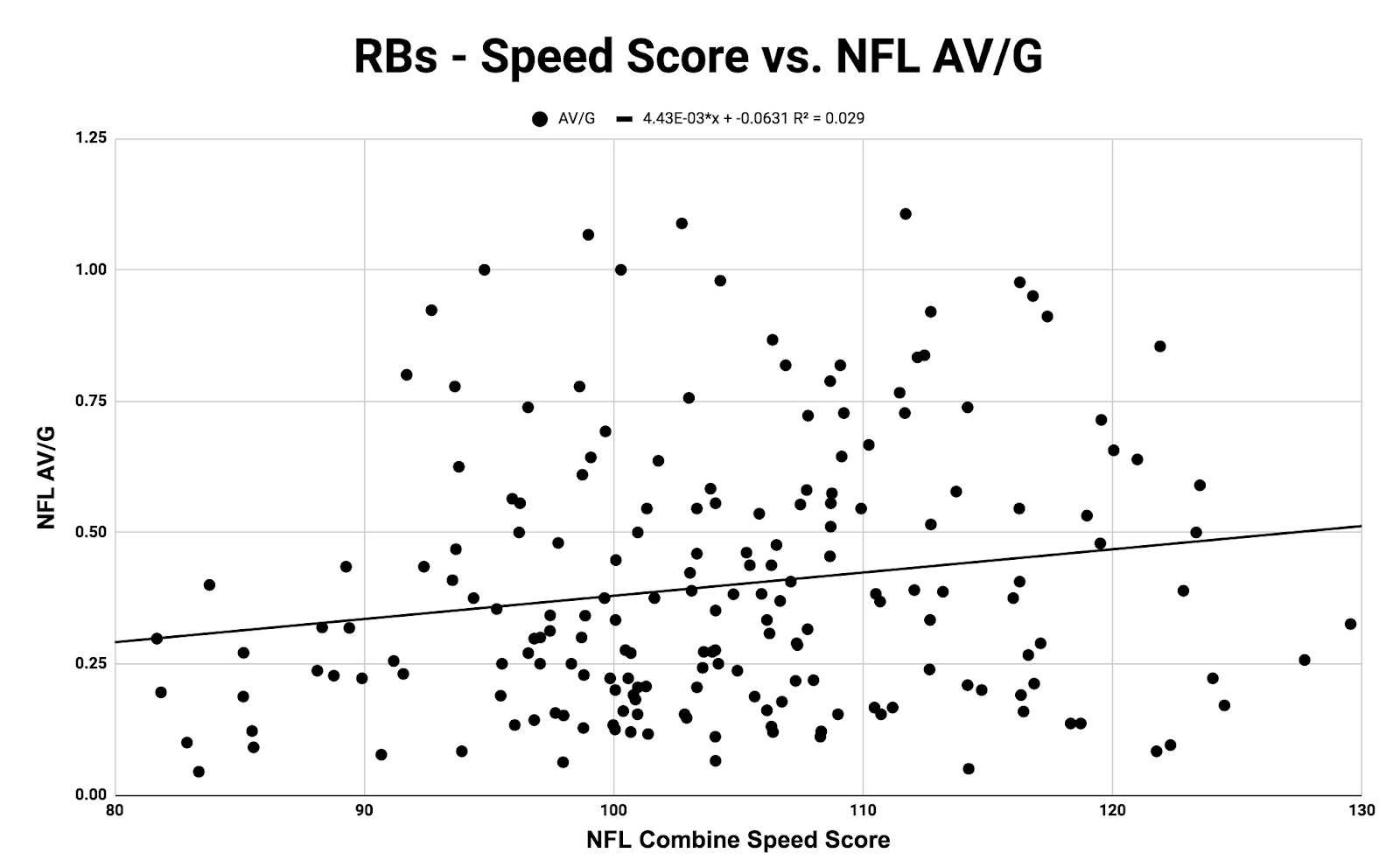 There’s basically zero correlation between NFL Combine Speed Score and early NFL success (AV/G). However, there’s another minimum threshold we can use. There hasn’t been a running back with a 91.7 or lower Speed Score that has averaged at least 0.5 AV/G in the NFL, which is my cutoff for “at least a low-end NFL starter.” 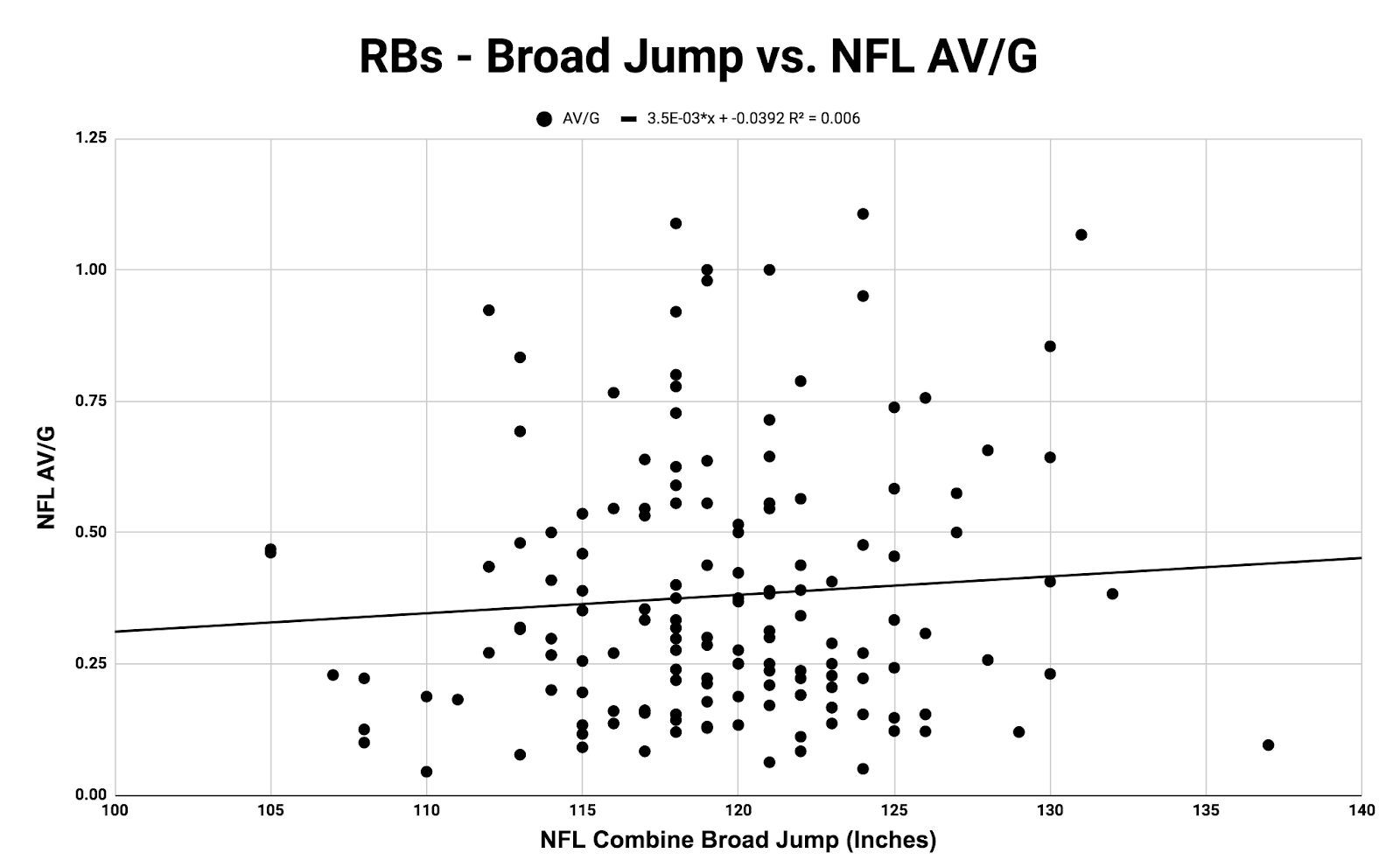 Another zero correlation test, but at least the broad jump has a nice minimum threshold. No running back has reached the 0.50 AV/G threshold with a jump lower than 112 inches. For the vertical jump, there’s really nothing I have gained by looking at the graph. It’s nearly a worthless measure for this position, but I’ll have sirens going off in my head if someone has a vertical jump under 30 inches since that puts them in uncharted waters.

Are there any minimum thresholds? 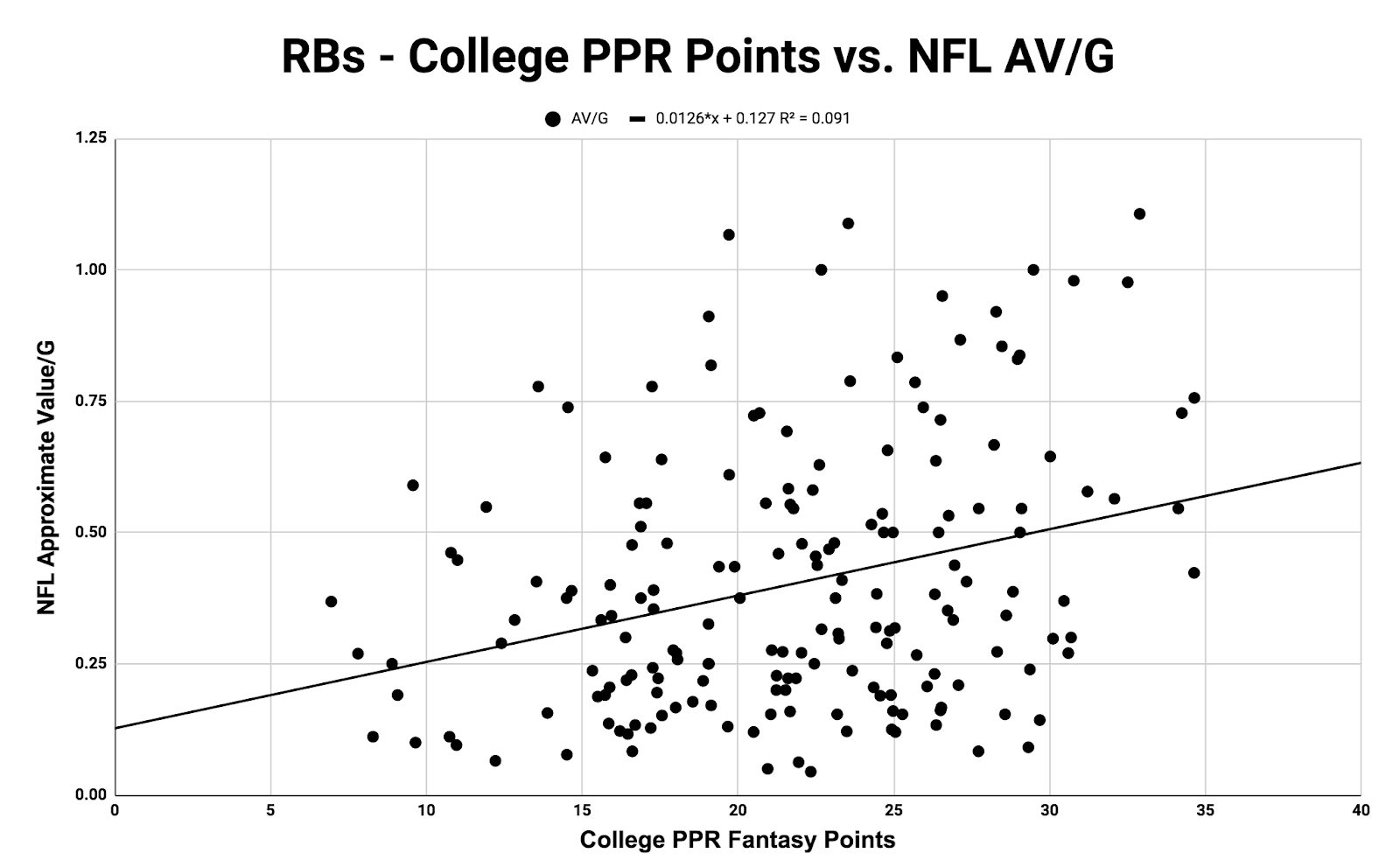 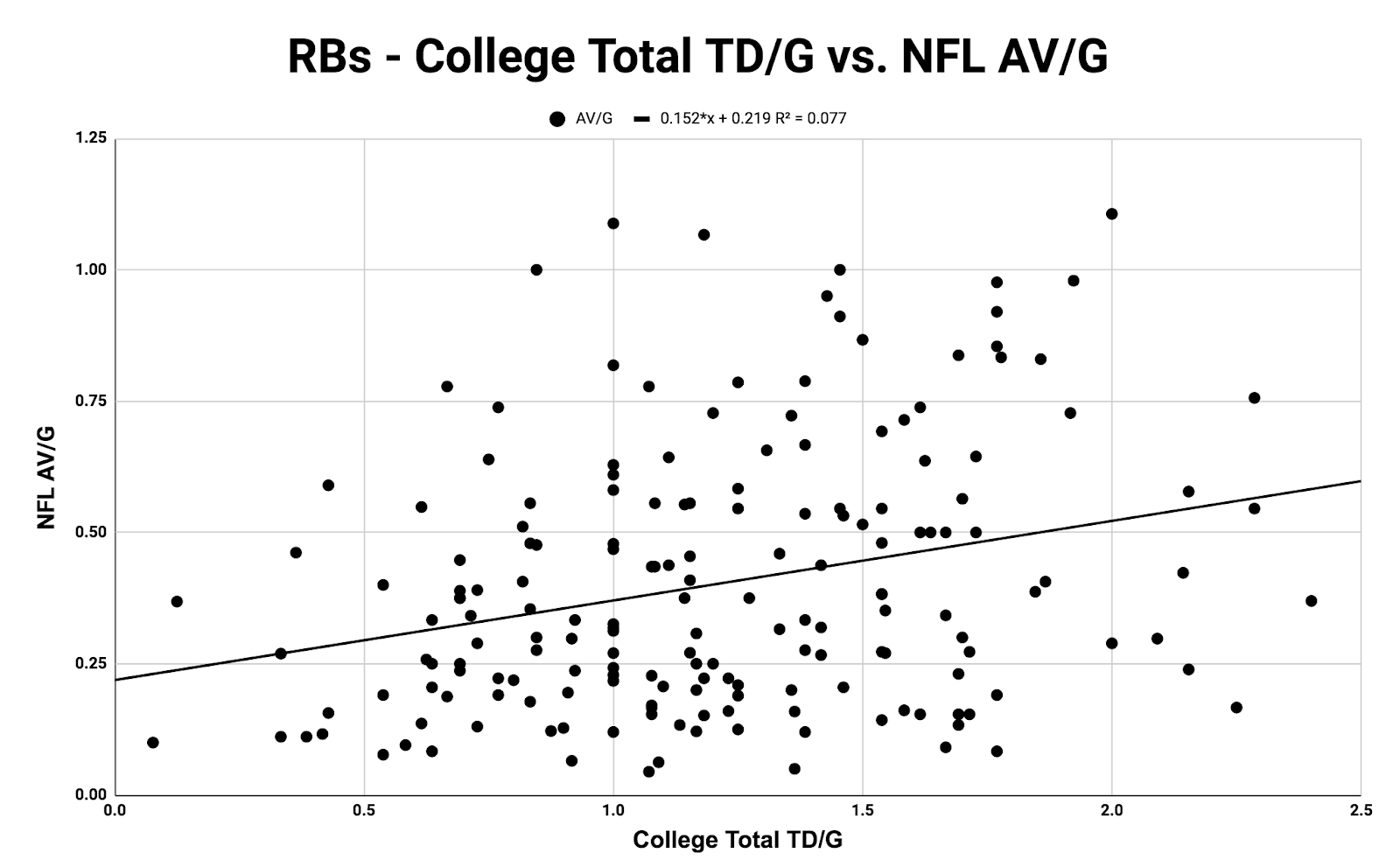 Of the per game box-score statistics, total touchdowns per game has historically been the most correlated to NFL success. College running backs who didn’t average at least 0.50 touchdowns per game have faced an uphill battle in the NFL. In fact, only one player (Brandon Jacobs) managed to crack the 0.5 AV/G threshold with a sub-0.5 TD/G total in his final collegiate season. Also, of the 21 backs to reach the 0.75 AV/G minimum threshold, 19 of them averaged at least one touchdown per game in their final collegiate season. That means Alabama RBs Josh Jacobs and Damien Harris would be outliers if they were able to reach this threshold since they scored 0.93 and 0.60 touchdowns per game in 2018/19. However, this is where the analytics community needs to use some common sense (or look at other TD metrics) and not discredit these backs. If Alabama didn’t pull their starters early every week, Jacobs would have reached this threshold. 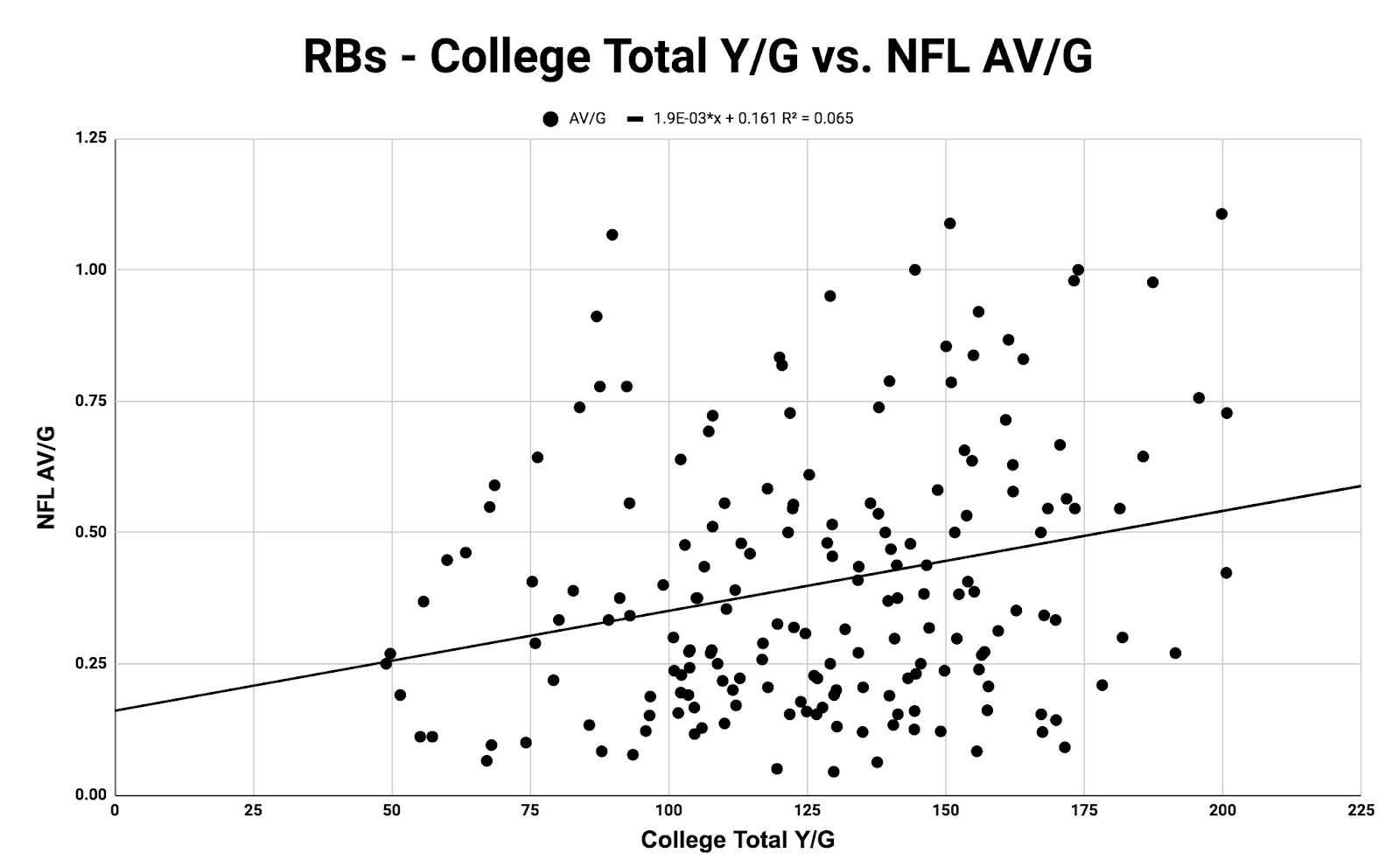 Total yards per game is a decent stat for running backs, especially if we continue to use these minimum thresholds. 88% of the running backs in this sample who had at least a 0.5 AV/G in NFL seasons two through four had averaged at least 100 total yards in their final collegiate season. More bad news for Joshua Jacobs and Damien Harris, but it’s not as big of a deal since they were cannibalizing each other and not playing full games in blow out wins. A similar, yet worse, case can be made for Georgia RB Elijah Holyfield, who also didn’t meet this requirement. 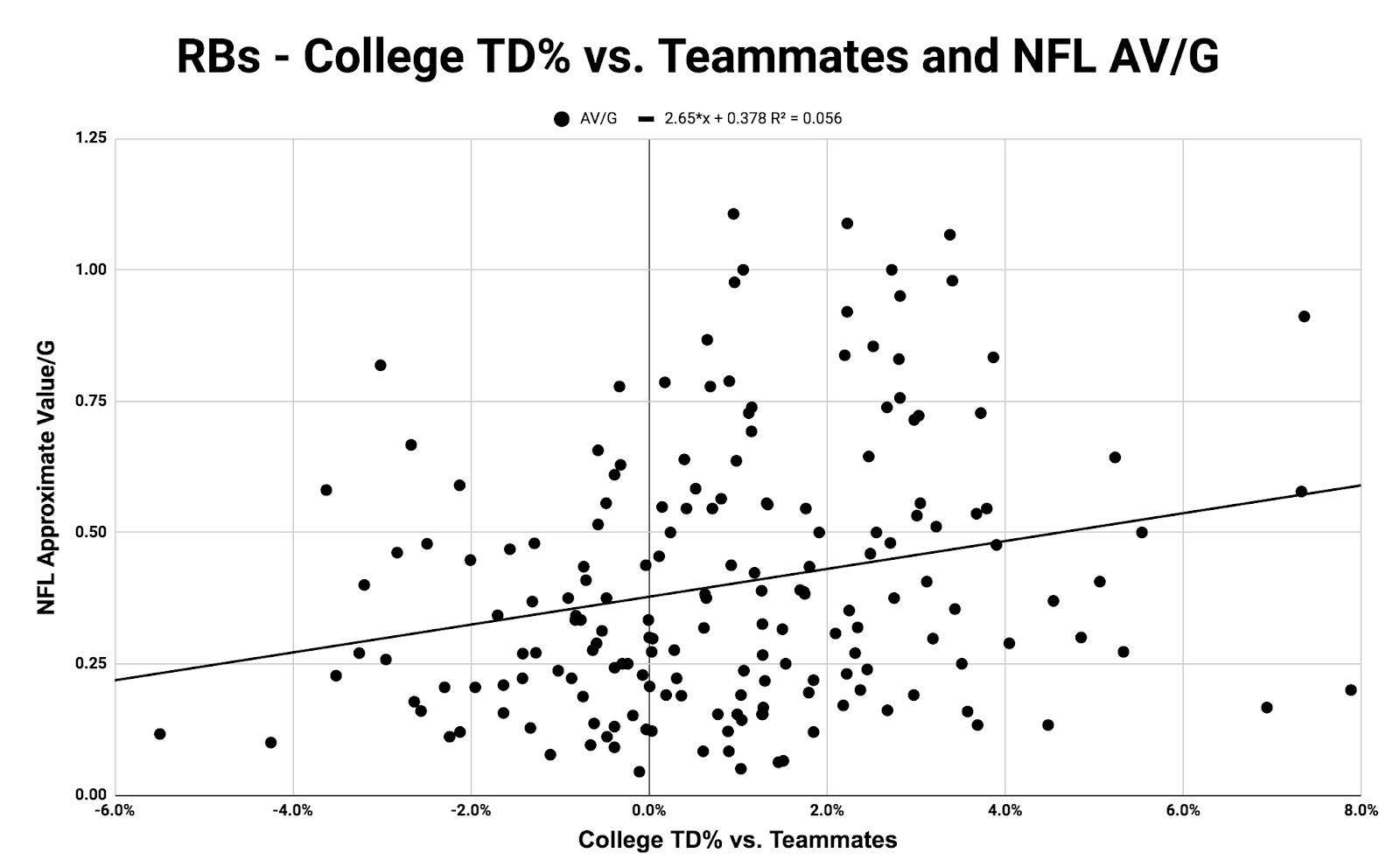 Touchdown rate versus teammates is a statistic that is vastly underrated in the running back prospect evaluation, as it shows that a college team was dependent on him for scoring touchdowns. In fact, 19 of 21 running backs who averaged at least 0.75 AV/G in the NFL (read: the really good RBs) had a positive TD% vs. Teammates. For this class, that’s bad news for Penn State RB Miles Sanders (-4.3%) and Elijah Holyfield (-1.1%).

What else is coming?

1. Correlation columns for the rest of the positions

2. Minimum Thresholds for each position, and which 2019 prospects pass the tests

4. Lots of other interesting columns