Tight end analytics is in its infancy. There’s very little college football data that shows their ability as a blocker, which is obviously more important for tight ends than wide receiver. So a lot of the models and stats you see are focusing on receiving production. That’s fine for most of you guys -- I’m assuming most are here for fantasy football purposes -- but I find it important to distinguish between model rankings for receiving production and overall rankings that would be incorporating an ability to block.

Anyways, in this column, the mission is to find what parts of an NFL prospect’s profile that actually matter… for receiving production. Does a tight end’s college receiving yards per game matter to overall success? What about just for his NFL YPT? Has the 40-yard dash been correlated to NFL PPR fantasy points? The list goes on and on, but this column will answer a lot of those questions.

The chart below will look complicated, but it’s really not. The left side of the chart is the college stats, and the top of the chart is the NFL stats. The darker the color (either green or red) the more correlated the two stats are. If there isn’t a lot of color in the cell, then the two stats have little to zero relationship. Here’s a short video if you’re confused. Lastly, the NFL data is for NFL seasons two through four (not the rookie season) because that’s when an NFL team is seeing the biggest returns on the draft pick, and it helps us avoid games where players were barely used. … The numbers shown in the chart are correlation coefficients. If you want R-squared, just square the number. I chose correlation coefficients to show positive and negative correlations with color. 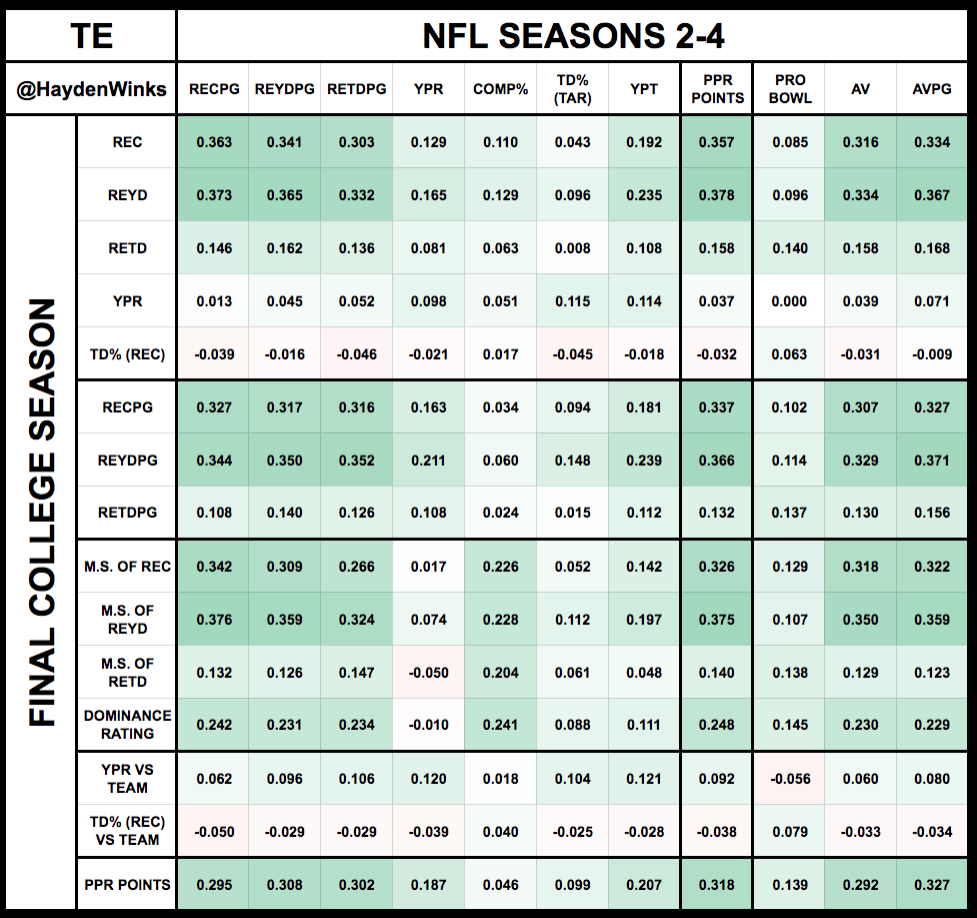 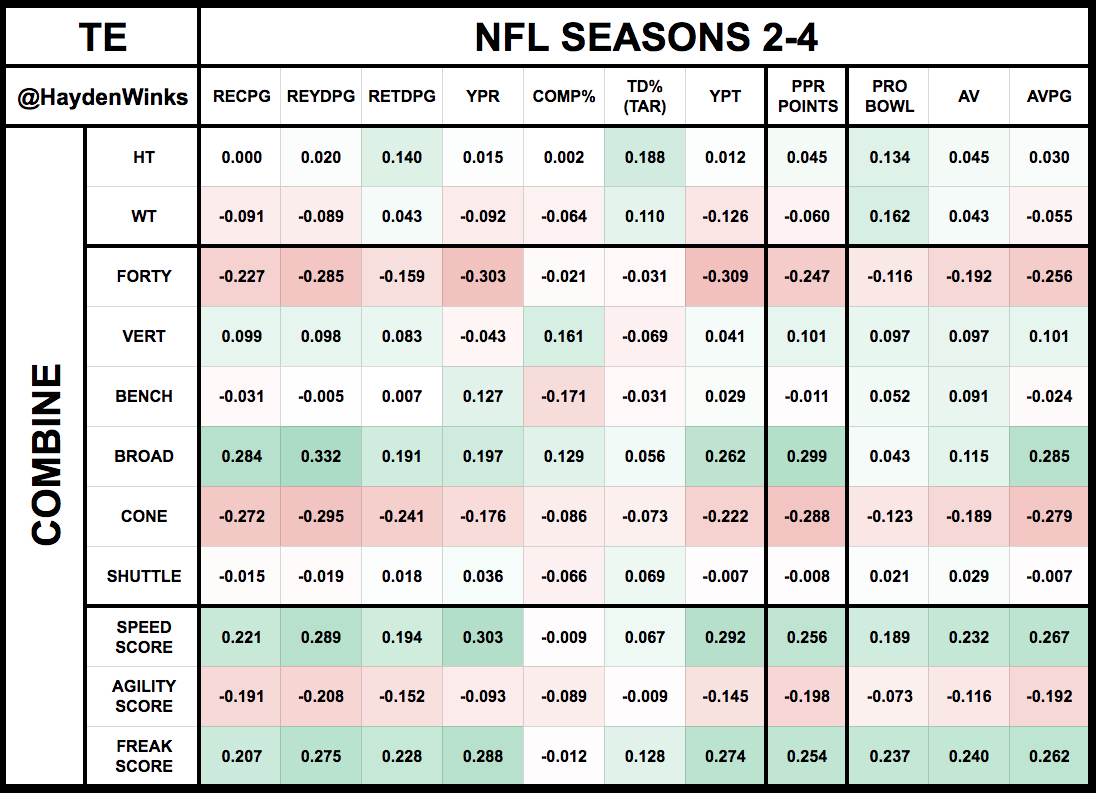 Statistics that have historically NOT been correlated to early NFL success (AV/G) for TEs:

Statistics that have historically been correlated to early NFL success (AV/G) for TEs:

College receiving yard stats have been more correlated to early NFL success for tight ends than college receiving touchdown stats. One of the primary reasons is the variability of touchdowns on a small sample, which is compounded with tight ends since they only see anywhere between 25 and 75 targets per year.

The NFL Combine is slightly more important for tight ends than the other skill positions for this same reason. It’s the “adding another bridge” example from my Economics and Law class. ... If there are only 30 bridges (read: targets) across the entire Colorado River, then adding bridges No. 31, 32, 33, 34, and 35 (read: NFL Combine results) would be to the relatively important to the community. However, if there are already 100 bridges in the community, then adding bridges five more bridges wouldn't hold a lot of value to the community because they already have tons of bridges -- a.k.a. diminishing returns. ... So, since we don't have as big of receiving samples for tight ends relative to wide receivers, we need to rely on the NFL Combine more. 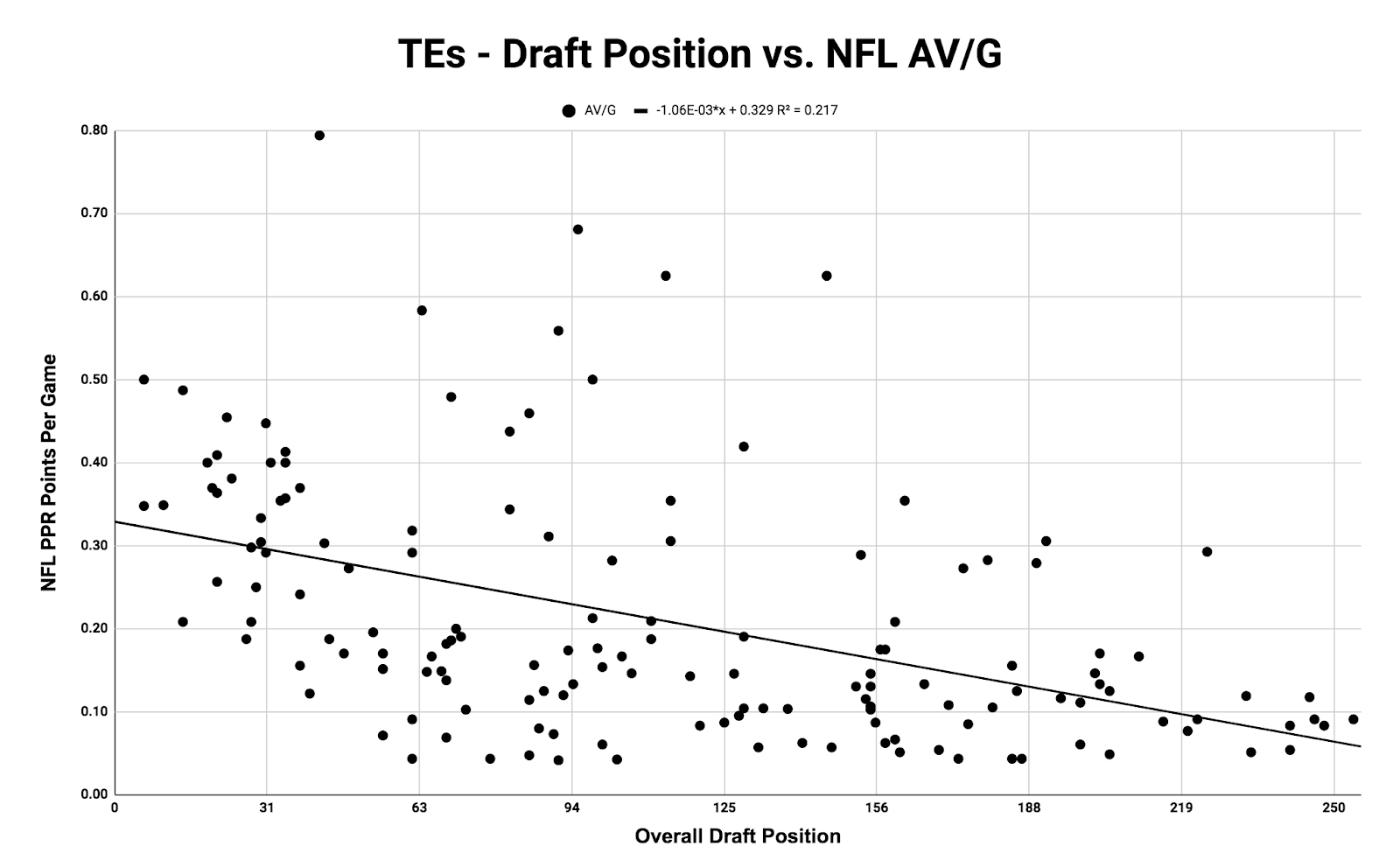 The NFL Draft has been better at evaluating tight ends relative to other positions, but there’s still a lot of room to improve. The r-squared for the position is 0.22, meaning that 22% of the variation in early NFL success for tight ends can be explained by the overall draft pick. That’s not terrible like other positions, but I’m expecting this number to improve with college football analytics starting to improve.

I theorize that the newest college football metrics will be better than what we currently have. For example, some of the stats in my 2019 NFL Draft TE Stats Report don’t have historical data, so we can’t measure correlation yet. But marginal efficiency/explosion, YPT vs. teammates, and other per-play metrics should outperform the current metrics that have historical data. So I’m using those data points as a part of my evaluation even if I don’t have proof that they are meaningful.

But if you want to build models that have historical data, I’ve found that the receiving yard stats have been the most correlated to early NFL success for tight ends. On the other hand, the NFL Combine has little to zero correlation to early NFL success, but I’ll monitor broad jump and freak score because they have been the most important (by default).

On the next page, we will get away from overall early NFL success and look at what’s correlated to individual statistics like fantasy points, receiving yards, receiving touchdowns, catch rate, and YPT. There are some interesting findings when we begin to plot these data points on graphs. Join me!

Data notes: The tight end sampled (n=149) met the following requirements: Had a total Approximate Value of at least 2.0 during NFL seasons two through four and were drafted between the year 2000-2017. Some of these tight ends that qualified didn’t play in the FBS, so their college statistics were omitted but I kept them in the sample while researching the NFL Combine. It’s up to you if you want to extrapolate these college production/efficiency findings to the FCS level. Also, not every wide receiver participated in the NFL Combine, but the sample (n=128 for the 40-yard dash) is large enough to take these NFL Combine results seriously. The reason I choose the year 2000 was to keep the sample large enough to have reasonable results, but not too far away from “Today’s NFL” that is vastly different than the 1980s. Lastly, since this sample is looking at NFL seasons two through four, it’s up to you to extrapolate these findings to projected rookie seasons and seasons coming after the rookie contract. I’d guess that the data would change marginally, but the major takeaways would more-or-less stay the same. … In order to establish a baseline for what “NFL success” is, I’ve decided to use Pro Football Reference’s Approximate Value statistic. While not perfect, it’s a good enough metric for the column (and it will help me analyze all positions, which will ultimately let me produce an Analytics Top-300 Big Board). If you aren’t familiar with approximate value per game (AV/G), here is how the top 2018 NFL TEs finished in AV. In general, the NFL-caliber starters have an AV/G of 0.50, and the studs are above 0.75 AV/G. Knowing this will help you as you scan the charts on Page 2.