Total QBR is a great stat. Not only is it one of the best predictors for projecting NFL rookie contract performance, but, as I threaded on Twitter, Total QBR for college quarterbacks is pretty stable year-to-year (r-squared=0.302). That’s why I used last year’s Total QBR as a starting point when I was nailing down these top 50 rankings, but there are obviously adjustments that needed to be made. The following charts visualize these adjustments: 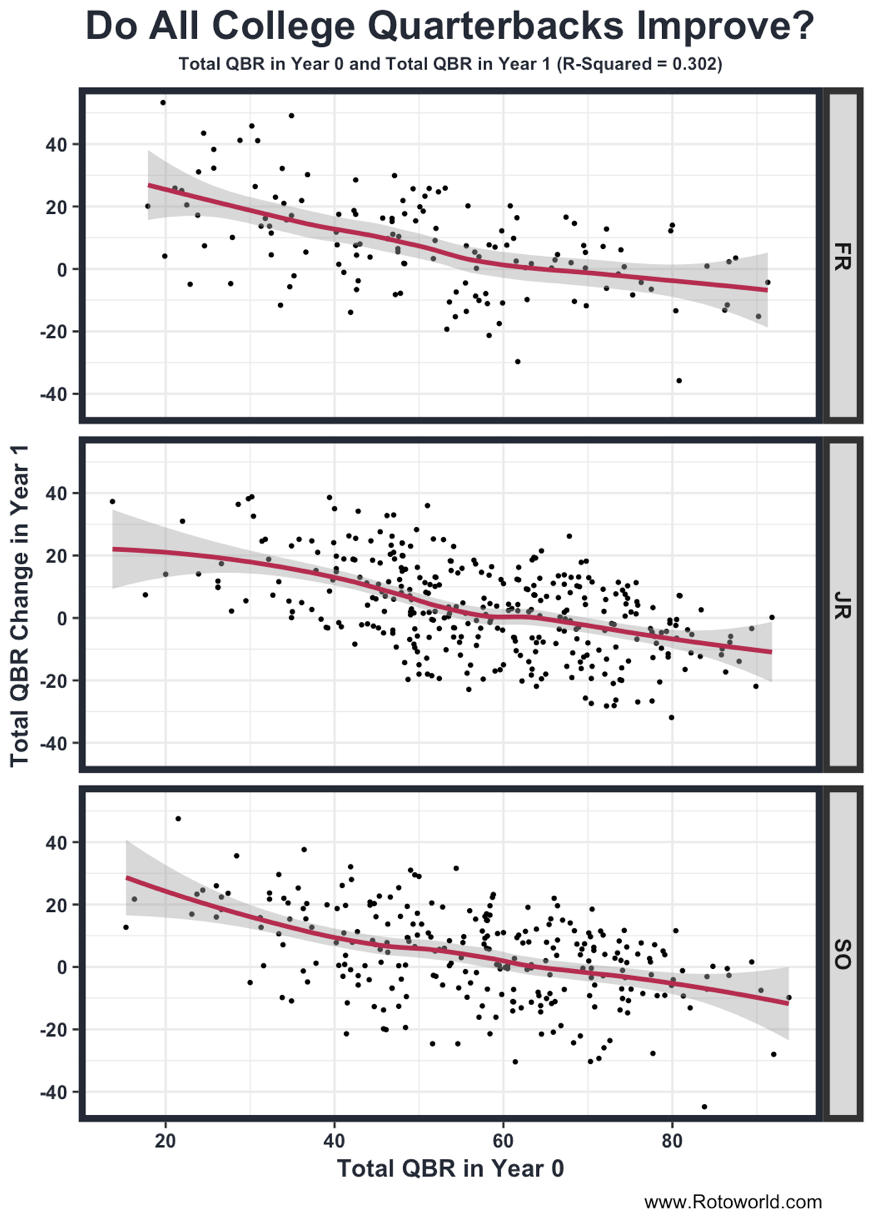 The trendlines (red) across all classes are nearly the same, but the standard errors (grey) are different. The widest standard error surrounds freshmen quarterbacks and the smallest surrounds juniors, meaning it’s easier to predict older quarterbacks. That’s not surprising, but it’s still valuable to know that because it tells me that I need to spend more time evaluating young quarterbacks since we more or less know what we’re getting with older ones.

The graphs also show how often sub-40 Total QBR quarterbacks improve their following year Total QBR, and it's usually by five to 40 points. This trend is especially true for freshmen quarterbacks going into their sophomore season. If this trend continues, we should expect East Carolina’s Holton Ahlers, New Mexico State’s Josh Adkins, and Rutgers’ Artur Sitkowski to take noticeable steps forward in 2019, even if that means going from look-away bad to below average. There could be value in the betting markets on these teams/players.

Lastly, the above graphs show how unlikely it is for quarterbacks who had a Total QBR of over 80 to improve their score the following season. Basically, regression applies to even elite college quarterbacks. However, most of the declines are small -- let’s say between one and 10 Total QBR points -- so it’s bold to project an elite quarterback from last year to become just an above average one. 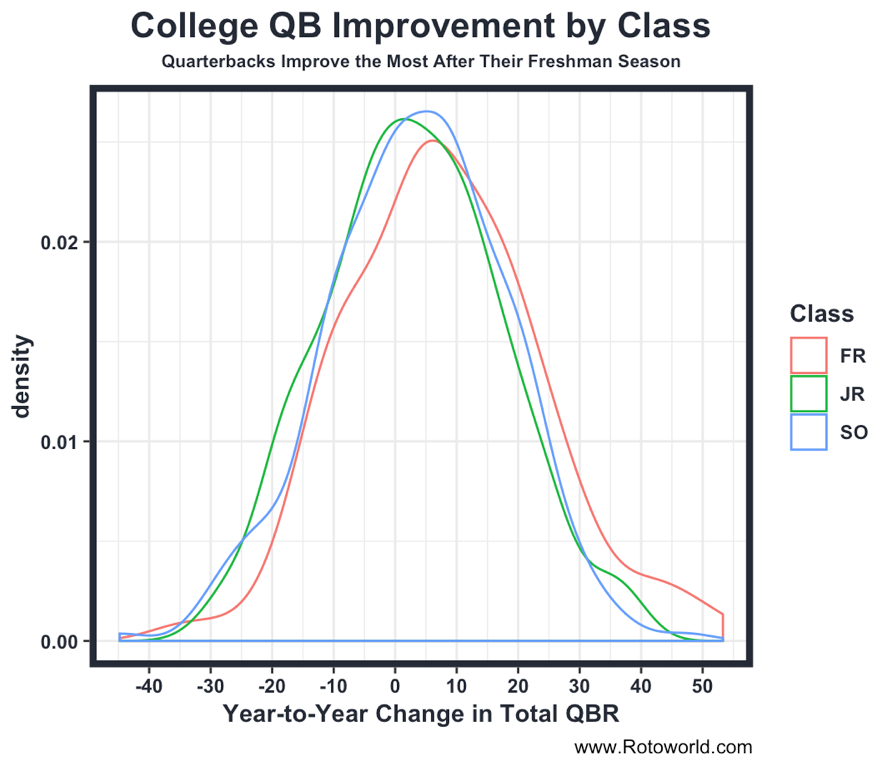 I’ll keep this one short because I’m probably losing your patience. This graph tells us the leap from a quarterback’s freshman-to-sophomore season is larger than the leaps from sophomore-to-junior and junior-to-senior seasons. That’s why you’ll see 2019 sophomores who played as freshmen last year higher in my personal top 50 rankings than what you're used to seeing across the industry. With that said, let’s dig in!

Tier 1 is reserved for the #GenerationalTalents. These guys can lead an average Power 5 team to the College Football Playoff and should be finalists for the Heisman. Find a couch when these quarterbacks are playing on Saturday.

As a sophomore in 2018, Tua Tagovailoa finished with the fourth best Total QBR season since 2004, and he did it going against the third toughest strength of schedule in the country. After lighting up the SEC to the tune of 10.4 YPA, Tagovailoa deserves to be ranked as the top quarterback going into 2019, but this next guy has a chance to dethrone him.

Last year, Trevor Lawrence had the eighth best Total QBR freshman season since 2004, but the former five-star did it against the 19th toughest strength of schedule to make the feat even more impressive. Even if Lawrence doesn’t make any progress in his second season, he’d likely be a top-five quarterback once again, but his upside is higher than any other quarterback in college football. Choosing between Tagovailoa and Lawrence for the No. 1 spot was extremely difficult.

Tier 2 quarterbacks are Heisman contenders, are good enough to lead their team to 10+ wins, and most have a higher floor than the Tier 3 quarterbacks.

Jake Fromm won’t have the box score production of other quarterbacks, but his efficiency is borderline elite considering the competition he faces most weeks. Last year, Fromm finished with the 10th best Total QBR sophomore season since 2004, and he did so by tossing 29 touchdowns to just two interceptions in all non-3rd-and-10+ situations.

Sam Ehlinger wasn’t as efficient as a passer as Fromm was last year, but Ehlinger had to handle a lot more volume, making his 8.3 YPA against FBS winning opponents even more exceptional. In addition to his high-end passing metrics, Ehlinger was 13th in Rushing EPA among returning FBS quarterbacks.

D'Eriq King will be returning from a torn meniscus so ranking him this high makes me nervous, but he was too good last year to drop him down the list. In 2018, King only trailed Kyler Murray in Total EPA and he finished third in Total QBR among returning FBS quarterbacks. As long as his knee cooperates, King has good odds to remain in the semi-elite college quarterback tier as one of the most explosive playmakers in the country. Oh, and if you want to lower him because he doesn’t play in a Power 5 conference, that’s fine, but he averaged 387.3 total yards against FBS winning teams last year so I can’t justify it.

K.J. Costello’s advanced numbers indicate he’s one of the most talented passers in the nation. Last year, the Stanford quarterback quietly finished sixth in Total QBR, sixth in YPA against FBS winning teams and eighth in Passing EPA.

Ian Book was the older (and slightly worse) version of Jake Fromm, and that’s a compliment in my book -- no pun intended. Book was seventh in Total QBR among returning FBS quarterbacks, averaged 8.2 YPA against Power 5 teams, and adds enough of a rushing element to keep opposing defenses honest.

Justin Herbert didn’t live up to high expectations in 2018 and, quite frankly, this ranking is putting a lot of faith in Herbert taking a step forward this season. Last year, Herbert finished 33rd in Passing EPA while averaging just 7.2 YPA against Power 5 opponents. Herbert’s “tools” need to turn into more production to assure a top-10 selection in the 2020 NFL Draft.

It takes some squinting, but Shea Patterson was a really strong quarterback for Michigan last year. Patterson’s efficiency placed him inside the top-10 in Total QBR despite unsettling mediocrity in the explosiveness department. If Patterson improves upon last year’s 53rd ranked 15+ yard play status, he’ll easily be one of the best quarterbacks in college football.

Jalen Hurts was the hardest quarterback to rank. Hurts has never been an elite college quarterback -- he’s certainly been above average --- but reports from last year said he made big leaps and I don’t want to bet against Lincoln Riley when it comes to offense. Ultimately, Hurts belongs in Tier 2, but five-star freshman Spencer Rattler will be threatening for that starting spot.

Tier 3 quarterbacks could play their way into Heisman contention and are good enough to lead their team to 8+ wins, but either aren’t established enough or haven’t shown enough of a ceiling to be in the tier above.

Kellen Mond hasn’t shown an ability to consistently sit back and pluck apart a defense as a passer, but his big-play (15th in 15+ yard passing plays in 2018) and rushing abilities (41.2 YPG against FBS winning teams) make Mond one of the more dynamic quarterbacks in the country.

Admittingly, this is a bold ranking for Brock Purdy, but his freshman season was quite rare. Purdy is one of two freshmen quarterbacks (Jameis Winston) to average over 10.0 YPA since 2000, and we’ll find out if that was because of Hakeem Butler or not this upcoming season. I’m betting on Purdy.

Joe Burrow quietly was 15th in Total QBR last year after finishing the season strong with 10 touchdowns to just one interception across his last four games. With this high ranking, I’m betting his 2018 finish was a sign of improvement and not a fluke.

Your guess is as good as mine with Justin Fields. I don’t put any stock into him leaving Georgia -- any QB worth anything would leave with Jake Fromm on campus -- so when I see Justin Fields’ name, I read “five-star recruit” and “Ohio State starting quarterback.” That sounds good to me.

Jordan Love had major home/road splits as a sophomore -- he averaged 10.6 yards per attempt at home and 6.9 YPA on the road -- but he’s shown enough of a ceiling (sixth in Passing EPA among 2018 sophomores) to warrant a top-20 spot.

Albeit at Ohio, Nathan Rourke finished 10th in YPA among FBS quarterbacks and he added 15 rushing touchdowns on the ground. Rourke will be one of the most productive and efficient players in the country.

Zac Thomas was 13th in Total QBR among FBS quarterbacks last year as a sophomore, but his 6.2 YPA against FBS winning teams keeps him outside the top-15, even with me expecting a minor leap as he heads into his junior season.

Adrian Martinez was another tough quarterback to rank. There’s a ton of buzz going into his sophomore season after showing flashes of a high-ceiling quarterback, but Martinez’s production may lead some to think he’s better than what he actually is. Now, don’t get me wrong. Martinez is a promising player, but he was 54th in Total QBR and 77th in Passing EPA last year. I’m expecting a sophomore leap, but not one that puts him inside the top 10.

As a freshman, Alan Bowman averaged 8.1 YPA against FBS winning teams while averaging 335 passing yards per game. Sometimes it feels like these Texas Tech yards are empty calories, but Bowman’s 68.1 Total QBR was good for 42nd in the country. This top-20 ranking is a bet on Bowman taking the standard freshman-to-sophomore season leap.

Feleipe' Franks had everything going against him in 2019 -- new coach, SEC schedule, average weapons -- but he still managed a 4:1 TD:INT ratio as a sophomore. Obviously, there’s room to grow as a passer -- he was 48th in Total QBR last year -- but Franks also offers rushing production and is younger than most on this list.

As for quarterbacks No. 21 through 34, I’m most excited to watch J.T. Daniels (highly recruited, new OC, strong receivers, some freshman-year promise, and I’m a USC grad), Khalil Tate (rebound coming?), Cole McDonald (explosive offense but can he keep his job the entire season?), Mason Fine (tons of production), Jacob Eason (lots of hype but largely a mystery), and Kelly Bryant (I'm hoping he rebounds).

Tier 4 quarterbacks likely won’t be in Heisman contention, but they are bowl eligible-level talents or young guns waiting to break into Tier 2 or Tier 3. However, if a couple of these quarterbacks were benched due to mediocrity, I wouldn’t be too surprised.

The Tier 4 quarterbacks I’m most excited to watch are Zachary Wilson (looked legit in limited reps as a freshman), Kelvin Hopkins Jr. (Army is good), Spencer Sanders (has a shot to launch way up in these rankings as a former Texas high school player of the year), James Blackman (has shown potential and I’m expecting an FSU rebound), Jamie Newman (Wake Forest QB competition is ongoing), and Gage Gubrud (Mike Leach the GOAT).