Note: These are not fantasy football or NFL Draft rankings. They are meant to be judging college football performance.

Distinguishing how much credit to give to a running back and how much credit to give to his offensive line, his quarterback, and his coaching staff is difficult, but the running backs who are focal points of their offenses are usually the best ones in the country. At least that’s what the data tells me when evaluating NFL prospects. Plus, efficiency metrics like yards per carry (r-squared = 0.175) and touchdown rate (0.066) aren’t very stable year-to-year for college running backs. That’s why I’m basing my top 50 college running back rankings on the following metrics: 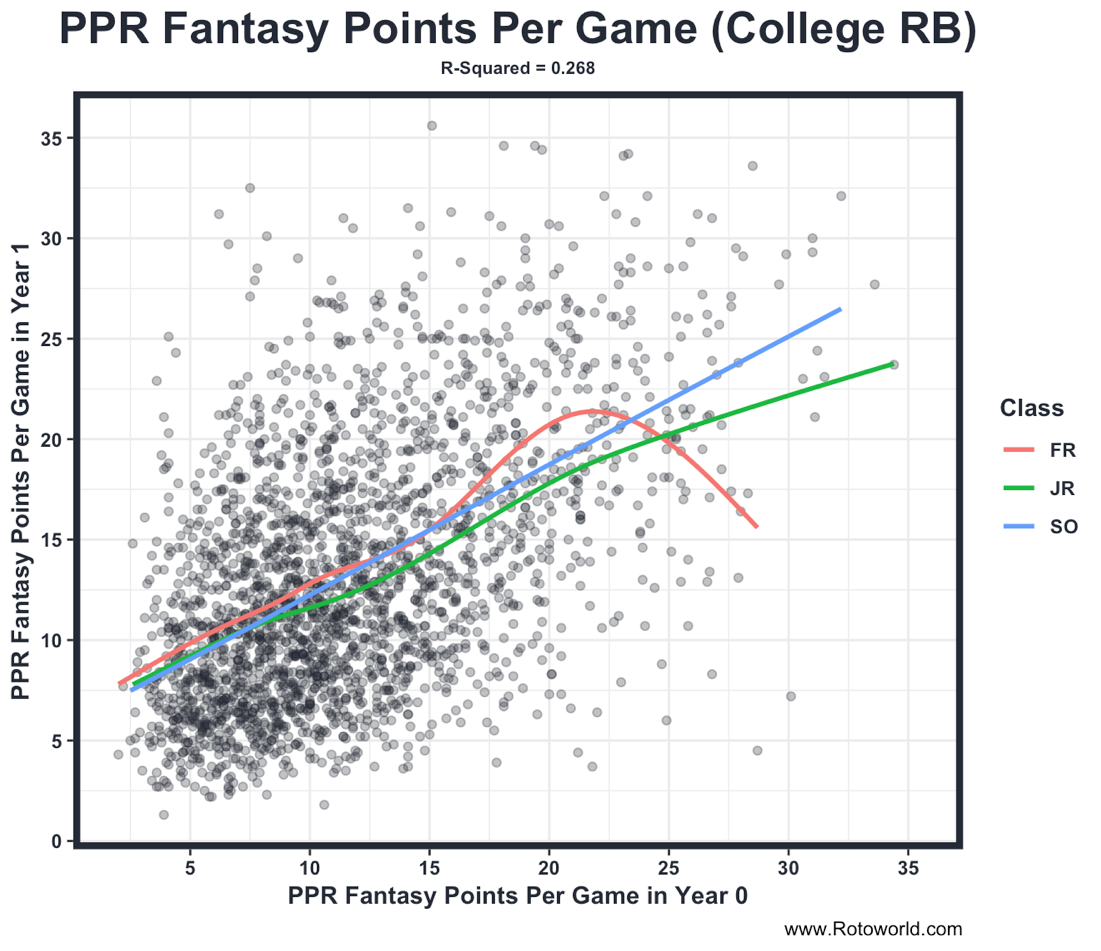 PPR Fantasy Points Per Game (FPPG) has been moderately stable year-to-year (r-squared = 0.268), but it’s also a good metric at finding versatile backs since yards, touchdowns, and receptions are all incorporated. The only problem with this stat is that it won’t help me rank backs stepping into a bigger role in 2019. That’s okay. I have eyeballs to help me with that. 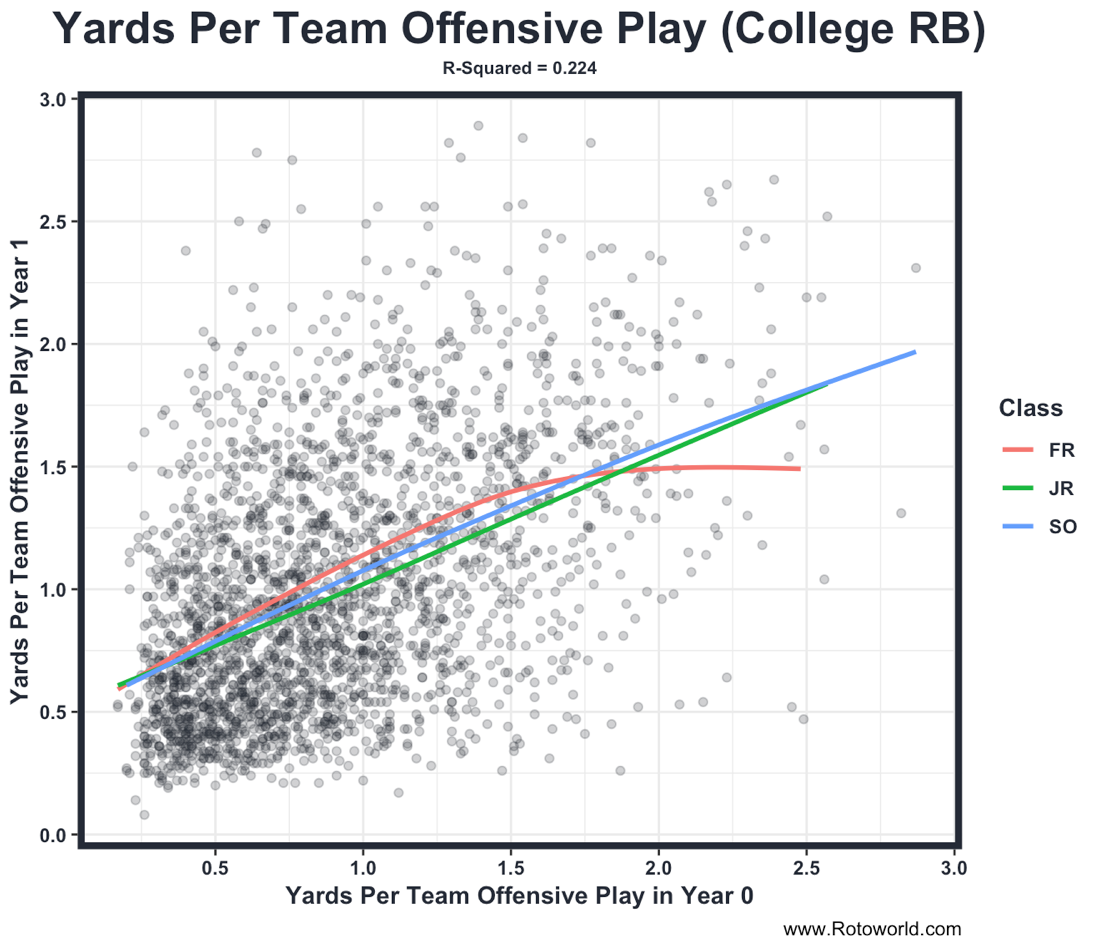 Yards Per Team Offensive Play (YTOP) is also moderately stable year-to-year (r-squared = 0.224), but it’s a little different than fantasy points per game because this measures production within an offense. This stat helps me compare a running back playing in Clemson’s offense and a running back playing for UCLA. 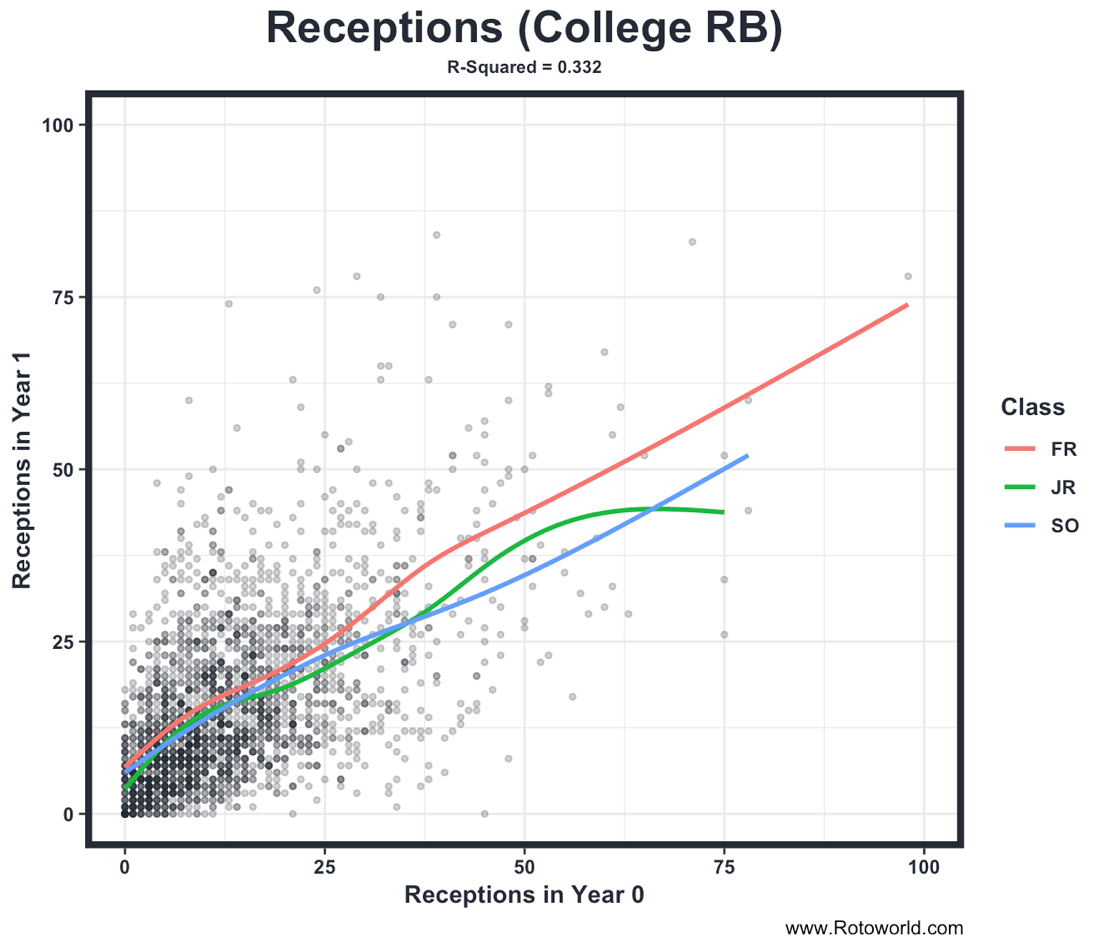 Lastly, I’m factoring in receptions because it’s quite stable year-to-year (r-squared = 0.332) and because receiving production helps a team more than rushing production. On top of that, a running back who catches passes won’t tip whether his team is running or passing, something that it’s obviously important. With these three metrics in mind, let’s get to the rankings!

Tier 1 running backs are established workhorses with NFL futures and most have shown some level of receiving ability. It’ll be hard to beat the top quarterbacks for the Heisman Trophy, but most of these backs are contenders.

Travis Etienne forced 52 missed tackles and racked up 884 yards after contact in 2018, but his speed may be his best attribute. Etienne had the most 20+ yard runs among returning FBS players (23). In fact, he had seven more 20+ yard runs than the second-place finisher, Jonathan Taylor. Etienne also led sophomore runners in 10+ yard runs percentage (21.6%) and 1st down percentage (31.9%). If Etienne shows more receiving production, then I’d consider him an elite NFL prospect heading into the 2020 NFL Draft.

Jonathan Taylor was Pro Football Focus' highest-graded running back in 2018, and he also led the country in 10+ yard runs (61). Built with speed -- he won two New Jersey state high school titles in the 100-meter dash back -- and with vision, Taylor’s only issue thus far has been a lack of receiving production. Hopefully we see that -- and more ball security -- before he declares for the NFL.

D'Andre Swift is close to exactly what I’m looking for in a running back. He’s got plenty of speed, can stay on the field for all three downs, and is an elite pass catcher out of the backfield and the slot. Swift’s versatility makes Georgia’s offense unpredictable when he’s on the field, allowing him to have more space as a runner. Swift, who led the SEC in 1st down percentage (30.7%) last year, gets his first opportunity to be the clear-cut RB1.

Eno Benjamin averaged 3.43 yards after contact per attempt during his breakout sophomore season that resulted in a second place finish in total yards per team offensive play (YTOP). Benjamin's elusiveness makes him a Tier 1 running back and his receiving production is just the cherry on top. If he can add just five pounds before the Combine, he’ll likely be a top-five prospect in this stacked class.

Most Tier 2 running backs either don’t have as much juice or as much versatility as the Tier 1 studs, but they still can take over a college game. A couple of these backs should leap into Tier 1 by the end of the season and all of them are clearly on NFL radars.

I almost went YOLO and put Najee Harris into Tier 1 despite him being largely unproven, but my brain beat out my heart. Harris led returning SEC running backs in missed tackles forced per touch as a backup, and it’s now his time to take over the Alabama backfield. The former five-star running back should be near the top of all rushing leaderboards in 2019 as one of the best pure runners, but I kept him out of Tier 1 since he’s not as versatile (52 career receiving yards) as the four above him.

J.K. Dobbins converted 11-of-14 (79%) 3rd down and 1-3 yards to go carries. However, only 1.7% of his carries went for 20+ yards. That was last among sophomore running backs with at least 153 carries. Since he had the top SPARQ score at the Nike Opening Finals as a high schooler, I’m guessing he had an injury that was affecting his top speed. If he shows more speed in 2019, he’ll be a fringe top-five running back in the country.

Ke'Shawn Vaughn was not only a complete workhorse for an SEC team, but he also averaged 2.9 more yards per carry than his teammates. That’s the most among running backs with at least 150 carries. Vaughn was also third in forced missed tackles per touch among returning SEC running backs, so it’s only a matter if he can show more receiving prowess for him to jump a tier. However, it’s worth mentioning that he was born in 1997.

Zack Moss ended the season with a knee injury, but before he was injured, Moss forced the most missed tackles per touch among returning Pac-12 running backs. Moss also keeps Utah’s offense unpredictable since he’s a skilled receiver out of the backfield. As long as his knee heals up properly, Moss will be a fringe top-10 back in the country.

CJ Verdell was fourth among Power 5 freshmen running backs in 1st down percentage in 2018 (24.8%), but he makes the cut as a Tier 2 back because of his receiving ability. Not only does Verdell keep Oregon’s offense unpredictable with his pass catching production, but he also can move the chains after the catch. Approximately 25% of college running backs average more than 10 yards per reception in a given season, and Verdell averaged 11.7 YPR while hauling in 27 passes.

Joshua Kelley had the third-most total yards per game in 2018 among returning FBS running backs, and he also finished tied for third in rushing touchdowns against Power 5 teams (12). A one-year wonder thus far, Kelly needs to come close to repeating his 2018 season to be in the Day 2 conversation, but he certainly has the athleticism to do so.